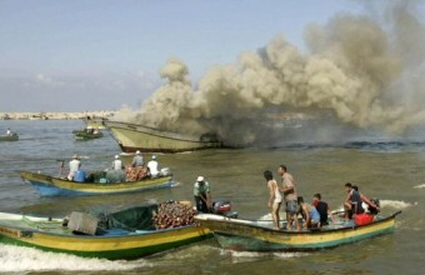 The attack caused severe damages to three boats, whereas no injuries were reported among fishermen who were forced to leave the sea, for fear of being injured, killed, or detained.

The Israeli navy targets Gaza fishermen and farmers along the borderline on an almost daily basis, in a blatant breach of a ceasefire agreement reached between Israel and armed Palestinian groups in August of 2014, following 51 days of bloody aggression on the Gaza Strip, which claimed the lives of over 2.200 Palestinians, most of whom were civilians.

According to the Palestinian Center for Human Rights (PCHR), all Israeli attacks on Palestinian fishermen have taken place within the distance of six nautical miles, which it said “proves that Israeli forces’ policies aim to tighten restrictions on the Gaza Strip’s fishermen and their livelihoods.”

Israel has imposed a tightened blockade since 2007 after Hamas won the democratic legislative election and took over power in the Strip.