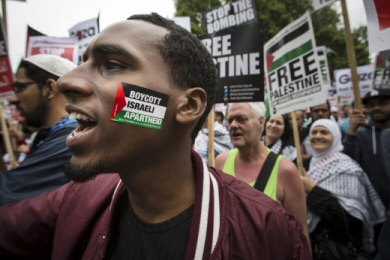 New documents seen by The Electronic Intifada, obtained under freedom of information laws, show that the British Council has been quietly working to thwart the boycott, divestment and sanctions (BDS) movement in support of Palestinian rights.The revelations about the government-funded program come as the UK attempts to ban local government from boycotting companies complicit in Israeli human rights abuses.

The Electronic Intifada has also discovered that Nathan Kirsh, a billionaire businessman profiting directly fromIsrael’s wall in the occupied West Bank, is a donor to the British Council’s little-known anti-boycott project BIRAX: the Britain Israel Research and Academic Exchange Partnership.

Facts on the ground

The British Council is a quasi-governmental body which describes itself as making an important “contribution to UK soft power.” It gets approximately 20 percent of its funding from the UK Foreign Office. It administers educational and “cultural relations” projects in more than 100 countries around the world.

In 2008 its Israel office instigated BIRAX jointly with the British Embassy in Israel and private pro-Israel donors.

As the original proposal, published below, states explicitly, BIRAX sought to offer “a practical response to recent calls in the UK for an academic boycott of Israel” — a reference to one of the first major boycott victories in a British trade union, the 2007 vote by the University and College Union which caused international alarm in the Zionist camp.

In response, BIRAX was launched by the prime ministers of Israel and the UK with the aim to “deepen institutional links” between British and Israeli universities. Only later, in 2011, was it decided that BIRAX should focus on regenerative medicine, a scientific emphasis which played neatly into Israel’s public relations strategy to promote itself as a hub of technological innovation.

Through BIRAX, the British Council has so far arranged 15 research collaborations between Israeli and UK universities. With a total value of at least £7 million ($9.9 million), these function as facts on the ground, undermining the campaign to boycott Israeli academic institutions by their very existence.
The third round of calls is currently open, offering £3 million ($4.2 million) of additional research funding.

In 2012, after the Palestine Festival of Literature spoke out in favor of BDS, its dismayed financial sponsor the British Council ironically justified its own decision to issue a statement opposing the boycott by describing itself as a “non-political organization.”

Yet internal correspondence obtained through a freedom of information request, some of which is published below, shows that behind the scenes the British Council has been making strenuous efforts to track and oppose the boycott.

In an October 2015 email, seen by The Electronic Intifada, British Council staff asked the pro-Israel Union of Jewish Students to keep them abreast of “what’s happening re the boycott on campuses.”
In a 12 June 2015 email, published in full below, an employee from the British Council’s Israel office offered assistance to the Union of Jewish Students, saying the organization was considering ways “to support combatting the calls for BDS on UK universities.”

That message was sent soon after the National Union of Students (NUS), which represents 7 million university pupils in the UK, had voted to support BDS on 2 June 2015. Just a day after that vote, British Council employees, apparently monitoring developments with a sense of urgency, sent emails with the subject “BDS” (published below) outlining a range of possible actions in response.

While paying lip service to “the right of the Union to hold and to publicize this position,” in practice, British Council staff – whose names have been redacted – sought to undermine the democratic decision of the NUS.

They enlisted the help of academics, “BIS” (the Department for Business Innovation and Skills) and “Number 10 contacts,” i.e. the prime minister’s office, in the counter-campaign.

The British Council saw fit to intervene yet again when in October 2015, 300 UK-based academics pledged to boycott Israel in a statement published in The Guardian. In an email seen by The Electronic Intifada, an opposing anti-boycott statement was quickly compiled and circulated by the British Council. An academic, whose name has been redacted, from the Weizmann Institute of Science in Israel replied complimenting theswift UK response.

The British Council has also been explicit about its counter-boycott goals when courting donors for the BIRAX project.

In one internal email (published below, 17 June 2015), a staff member suggests a “possible patron” for BIRAX, and shares with a colleague “some recent info about his interest in supporting anti-BDS activities.” Indeed, a specific emailed pitch — under the subhead “BIRAX / BDS appeal” — was even penned to appeal to this funder.

Although the funder’s name was redacted, it is known who many of the donors behind the project are.
A few established medical research organizations, like the British Heart Foundation, have recently donated to BIRAX. However, the evidence suggests that most of its benefactors are more interested in combatting the boycott than furthering scientific progress.

The earliest confirmed backers of BIRAX were the United Jewish Israel Appeal — Britain’s “major fundraising organization for Israel” — and the Pears Foundation. The latter, also the chief financier of Israel Studiesprograms at UK universities, has given £1 million ($1.4 million) to the British Council for the BIRAX project.

Its executive chair, Trevor Pears, is a millionaire property magnate, Conservative Party donor and formerly sat on the boards of both Conservative Friends of Israel and BICOM, a heavyweight Israel lobby group in the UK.

Meanwhile, millionaire Tory peer Lord Stanley Fink, one of the private donors who financed the short-lived pro-Israel propaganda organization Just Journalism and is also vice president of the pro-Israel Jewish Leadership Council, has given £100,000 to BIRAX, according to figures released by the British Council under a freedom of information request.

The Atkin Foundation, whose founders Celia and Edward Atkin have also supported BICOM, gave an undisclosed amount to BIRAX.

Yad Hanadiv — which coordinates philanthropic donations for the Rothschild family, a historically important dynasty in the Zionist movement — also donated an unknown amount, a 2012 letter to the British Council seen by The Electronic Intifada shows.

In both of these cases, the donations were subject to a confidentiality clause. This is why the the amounts were redacted from the documents released under freedom of information, the British Council said.

Though the name Nathan Kirsh had not previously been publicized in connection with the project, unlike other donors, according to a 2012 grant letter from Yad Hanadiv, seen by The Electronic Intifada, the billionaire South African businessman is also a BIRAX donor.

The world’s 435th wealthiest person, according to the 2015 Forbes list, Kirsh is the biggest shareholder in Magal Security Systems, a company which won 80 percent of the original contracts for Israel’s wall in the West Bank in 2002 and has also made millions from building the Israeli fence around Gaza.

In an emailed response the British Council confirmed that the Kirsh Foundation gave £176,000 ($250,000) to Israel’s Hebrew University through BIRAX.

This begs the question whether the project may even be partially funded with profits from Israel’s wall, which the International Court of Justice said violates international law in an advisory opinion issued in 2004.

In addition, Israel’s Ministry of Science and Technology has invested at least £250,000 ($350,000) in the BIRAX project, according to a 2012 letter seen by The Electronic Intifada.

The taxpayer-funded British Council is trying to quash a grassroots movement for Palestinian rights supported by an increasing proportion of the British public. But it is also channeling donations from the Israeli government and elite Zionist donors with direct links to Israel’s illegal wall.

The British Council is at least consistent. In an interview with the Tel Aviv newspaper Haaretz during a visit to Israel, its chair Sir Vernon Ellis noted a historical precedent for his organization’s anti-boycott stance, stating that it “continued working in apartheid South Africa.”

When asked to comment on the efforts of its Israel office to monitor and oppose boycott motions passed by representative student bodies — and the explicit references to stopping the BDS movement in pitches to potential BIRAX funders — a British Council spokesperson said these characterizations were “untrue” and that the entire purpose of BIRAX was “to promote cultural relations and support scientific research.”

Also of interest: Why BDS Cannot Lose: A Moral Threshold to Combat Racism in Israel