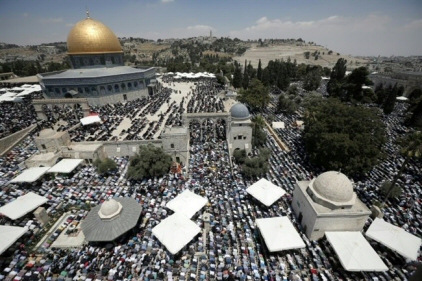 Israeli authorities, on Wednesday, cancelled a weekly visit which allows elderly Palestinians, from the Gaza Strip, to travel to annexed East Jerusalem for Friday prayers at Al-Aqsa Mosque, according to Palestinian liaison officials.Sources at the liaison office said that Israel had called off the agreement, which previously allowed 200 Gazans above the age of 60 to worship at the holy site as part of a ceasefire agreement that ended the 2014 Gaza war.

Sources said that Israel cancelled the agreement on the grounds that Palestinian worshipers traveling for worship were not returning to the Gaza Strip on the same day of the visit, as the agreement stipulated.

A spokesperson for Israel’s Coordinator of Government Activities in the Territories (COGAT) confirmed the cancellation and said that: ‘Any claims regarding the freezing of permits for prayers in the Temple Mount [Al-Aqsa] should be directed to those who choose to exploit illegally the permits at the expense of the rest of the public.’

‘In light of inappropriate misusing of the permit and exploiting inappropriately the Israeli civil policy, it has been decided to freeze the permits for prayers in the Temple Mount [Al-Aqsa],’ the spokesperson said, adding that over 1,000 Palestinians in Gaza are permitted to cross into Israel, each day, for a variety of purposes, including business affairs or medical treatment.

The spokesperson said that giving permits for entry to the Al-Aqsa compound is a ‘civil step’ among others taken by the body, but added that any ‘attempts to harm the security of Israel’ would not be tolerated.

The spokesperson told Ma’an that the decision was temporary until the issue was addressed by the Palestinian Civil Committee in the Gaza Strip.

The announcement comes after Israeli authorities, last week, reportedly said they were considering increasing the number of Palestinians able to travel from Gaza to Al-Aqsa, as well as lowering the age limit to 50.

Increased Israeli presence at the site, last year, contributed to an escalation of tensions that triggered a wave of unrest across Israel and the occupied Palestinian territories in October.