US Congressmen Call for Investigation into Israeli Crimes 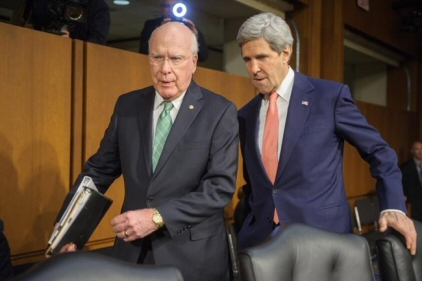 US Senator Patrick Leahy, along with 10 other Democratic congressmen, have called on the US to investigate the possibility of “gross violations of human rights” by Israel’s and Egypt’s security forces, including “extrajudicial killings.”

US Senator Patrick Leahy together with US Secretary of State John Kerry in March, 2014. (Photo credit: leahy.senate.gov)

Leahy, who has in the past sought a greater role for human rights in US foreign policy, made the request in a joint letter, sent to US Secretary of State John Kerry on Feb. 17, suggesting that if the reports of rights violations should be proven, US military assistance should be cut off.

“There have been a disturbing number of reports of possible gross violations of human rights by security forces in Israel and Egypt — incidents that may have involved recipients, or potential recipients, of US military assistance,” the congressmen said in the letter published on Tuesday by Politico.

According to Ma’an, the letter cited findings by Amnesty International and other human rights organizations of “extrajudicial killings by the Israeli military and police of Fadi Alloun, Saad al-Atrash, Hadeel Hashlamoun, and Mutaz Ewisa,” as well as several cases of torture.

“We urge you to determine if these reports are credible and to inform us of your findings,” the congressmen said.

The letter went on to say they had received information that the usual mechanisms in determining the provision of US military assistance and monitoring its use had been “hindered” by a “unique situation” created since the Camp David Accords.

It suggested the US State Department and Department of Defense may be in breach of the Leahy Law — a law named after the Vermont senator that prohibits the provision of military assistance to foreign military units that violate human rights with impunity.

If the reports were proven true, the congressmen said, the US should “take appropriate action called for under the law.”

The letter also cited human rights violations carried out by the Egyptian army, including the 2013 massacre in Rabaa Square and a number of recently documented Egyptian “extrajudicial killings.”

Every year, the US provides over $3 billion worth of military assistance to Israel, and is currently negotiating a package for the next 10 years that is expected to see that amount increase. Hundreds of millions of dollars have also been provided to the Egyptian army since it toppled the nation’s first democratically elected president in 2013.

The letter was sent before a soldier’s gruesome killing of a wounded Palestinian in Hebron caused international outcry last week, an incident one senior UN official branded an “extrajudicial execution” and a “gruesome, immoral, and unjust act.”

Israeli forces have faced repeated criticism for their excessive use of force against Palestinians since a wave of unrest swept Israel and the occupied Palestinian territory last October.

More than 200 Palestinians have now been shot dead by Israeli forces, some in clashes, the majority after they had been accused of attacking or attempting to attack Israelis, with nearly 30 Israelis killed in the same period.

However, human rights groups have repeatedly condemned Israeli forces for opening fire on Palestinians who posed no imminent danger, in killings they say amount to “extrajudicial executions.”