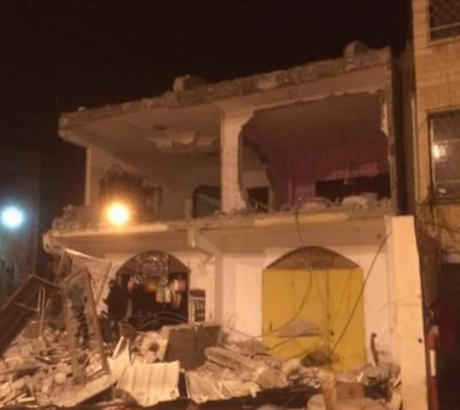 Israeli soldiers, accompanied by several vehicles and bulldozers, invaded on Monday at dawn, Qabatia town, south of the northern West Bank city of Jenin, and demolished homes of three Palestinians, who were killed in occupied Jerusalem, two months ago. Many Palestinians were injured by army fire, including two with live rounds.

The soldiers surrounded the town before invading it, and demolished the homes of three slain Palestinians, identified as Ahmad Najeh Abu ar-Rob, 21, Ahmad Najeh Zakarna, 22, and Mohammad Ahmad Kamil, 20.

Local sources said the soldiers invaded and surrounded several neighborhoods in the town, before breaking into many homes, and used them as military posts and monitoring towers.

The soldiers then stormed the three homes, forced the families out and demolished their properties.

The sources added that clashes took place between the soldiers and many local youths, who hurled stones and empty bottles on the invading army vehicles.

Medical sources said the soldiers shot and injured two Palestinians from the Kamil family with live fire in their legs, before local medics moved them to the Jenin Hospital.

The soldiers also fired dozens of gas bombs, causing many families to suffer the effects of tear gas inhalation.

The demolition of the homes rendered more than 21 Palestinians, including many children, homeless. Each of the demolished homes is approximately 150 square/meters.

The families said they filed appeals to the Israeli High Court in an attempt to prevent the demolition of their homes, but it rejected them nearly ten days ago, paving the way for the military to destroy them.

The soldiers also invaded the home of detainee Bilal Abu ar-Rob, and handed his family a demolition order for their property, allegedly for “transporting the three Palestinians to Jerusalem, where they carried out a shooting attack targeting Israeli soldiers and police officers.

The three Palestinians were killed on Wednesday, February 3rd 2016, after they killed an Israeli police officer and wounded another, near Damascus Gate, in the Old City of occupied East Jerusalem.

A week ago, the soldiers invaded Qabatia before storming the three homes, and took pictures and measurements of the properties.

In addition, the soldiers invaded the West Bank district of Bethlehem, broke into and searched homes, and kidnapped three Palestinians.