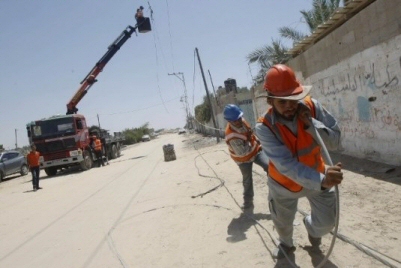 Israel Electric Corporation (IEC) cut off power to the occupied West Bank city of Bethlehem on Monday afternoon, reportedly as a warning over the Palestinian Authority’s mounting debt.

Hisham al-Omari, the head of the Jerusalem District Electricity Company (JDECO), told Ma’an News Agency that the cut had originally been intended to take place in the city of Ramallah and al-Bireh, where most PA institutions are located.

The PA tried to dissuade IEC from carrying out cuts in the West Bank, al-Omari said, but the Israeli government-owned company decided on short notice to cut off electricity to Bethlehem instead between 2 p.m. and 6 p.m.

Deputy mayor of Bethlehem Issam Juha said that the municipality had not been warned in advance that the cut would take place.

Al-Omari also said that further cuts were to take places across the West Bank in the coming two weeks, with cuts scheduled on Wednesday between 9 a.m. and 10 a.m. and 2 p.m. and 3 p.m. west of Bethlehem, including in the towns of Beit Jala and Doha, and the al-Duheisha refugee camp. Similar cuts were also expected to take place on Thursday in villages north of Ramallah, he added.

Al-Omari said the power cuts amounted to “collective punishment,” adding that the electricity cuts would have a particularly negative effect on Bethlehem’s economy, which relies heavily on tourism.

“It affects all the people, whether they have paid their bills or not,” he told Ma’an. “The power cuts won’t bring any solution to what is a political issue.”

IEC cut off electricity to the Jericho district on Thursday. At the time, al-Omari said the cuts proved Israel had plans to cut power supplies to other Palestinian cities being supplied by JDECO for unpaid debts amounting to more than 1.7 billion shekels (about $450 million).

JDECO filed a lawsuit against IEC in June demanding the corporation pay some 500 million shekels worth of compensation for the financial losses and damages that JDECO had suffered, which resulted of the expensive fines that the company paid to Israel for days of delay.

In May 2015, an initiative went into force to connect electricity grids in the occupied West Bank to Jordan as part of a greater move to interconnect power usage in the Arab world.

Expansion projects to the grid in the occupied West Bank comes as Palestinian dependence on Israeli electricity has been an ongoing point of contention between the two parties for years.

The contention arises partially due to massive debt owed by the Palestinian Authority to the IEC, which provides around 88 percent of total electricity consumption in the occupied Palestinian territory.

The effects of debts accumulated to IEC are seen beyond power cuts and growing indifference by residents to paying exorbitant bills.

“The non-payment by Palestinian distribution companies and municipalities for purchased electricity has put further constraints on the Palestinian Authority’s budget and has hindered economic stability,” Jorgensen added.

The World Bank recommended in the report that the Palestinian Authority put more effort into reducing non-payment of electricity bills, while the Israeli Electricity Company should cooperate with its Palestinian counterparts in developing payment plans.