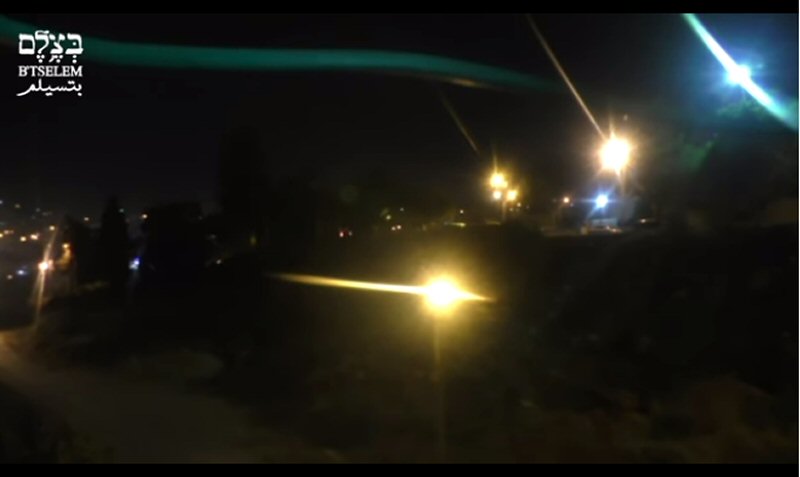 Israeli rights group B’Tselem released a video today showing a group of settlers from Israel’s illegal Kiryat Arba settlement, in the southern occupied West Bank district of Hebron, hurling abuse through a loudspeaker at Palestinians in the area.

In the presence of Israeli soldiers and police, settlers used a loudspeaker to hurl insults at Palestinians in the Al-Hariqah neighbourhood on Thursday, insulting Islam and the Prophet Mohammed, whom they called a dog, PNN reports.

According to B’Tselem’s statement, once the settlers noticed a Palestinian woman – a local volunteer for the group – filming them, their scathing language was directed at her and they began to threaten her with sexual violence. B’Tselem noted that the incident continued for hours.

Despite the disturbing threats, Israeli forces did not intervene. Occupation forces have been known to standby idly as Palestinians are abused by Israeli settlers.

The unidentified volunteer provided testimony to B’Tselem, in which she said that the Israeli settlers were having a party on a hilltop nearby and turned their music up when the Muslim call to prayer was sounded from the mosque. This is when they began insulting Islam.

When she started filming “the settlers began to use foul language and call out obscenities concerning me, Islam, and especially the Prophet Muhammad,” adding that it was not the first time that she has documented Israeli settlers insulting Islam in the presence of Israeli forces.

She told B’Tselem that as a Muslim, she was “extremely offended by the insults” against the Prophet Muhammad. “As a woman, I felt terrible hearing the foul language directed personally at me for filming them,” she said.

Over recent weeks, there have been routine reports of Israeli settler attacks on Palestinians and their homes in the Hebron district, particularly in the Old City.