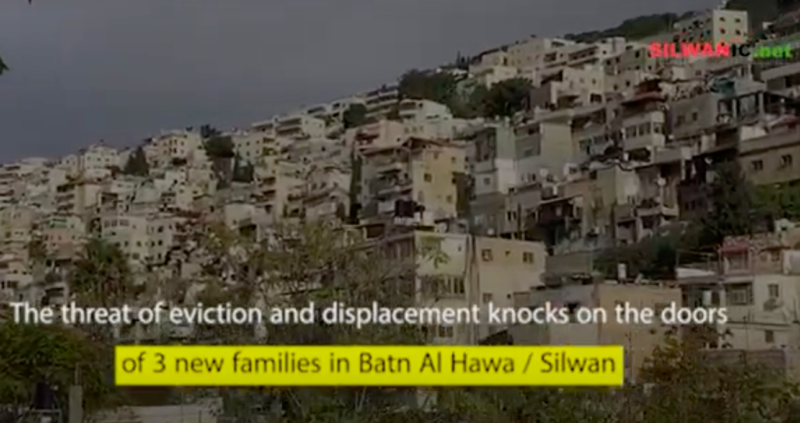 Three Palestinian families in occupied East Jerusalem have been evicted from their family homes as a result of the ruling by Israeli Magistrates’ Court, according to a joint statement released by the Wadi Hilweh Information Center and the Batn al-Hawa Neighborhood Committee.

In the Batn al-Hawa neighborhood in Silwan town, the two buildings, owned and inhabited by the Palestinian families of Shweiki, Dweik and Odeh, have been awarded to the “Ateret Cohenim settlement” association, under the pretext of purported Jewish ownership of the land.

In 1970, the Israeli Knesset enacted “Legal and Administrative Arrangements Law”, states that those who owned the property prior to 1948, could reclaim it from the Israeli public trustee.

The Dweik family’s grandfather purchased the land in 1963, the building has five floors, and one family lives on each floor, approximately twenty-five people inhabit the building.

Since 2008, the family have been battling the Israeli municipality for the right to live in their own home.

In January of 2019 the Magistrate’s Court ordered to expel the families, an appeal was filed with the District court denied the appeal.

The Wadi Hilweh Information Center and the Batn Al-Hawa Neighborhood Committee stated that the Central Court’s order for the Odeh and Shweiki families to vacate their two story building is in effect, after the Israeli Supreme Court ruled to deny the families request to put a freeze on the order.

The Odeh family lives on the first floor, while the Shweiki family resides on the second, said Qutaiba Odeh, vowing to keep pursue justice in the Israeli occupation court system.