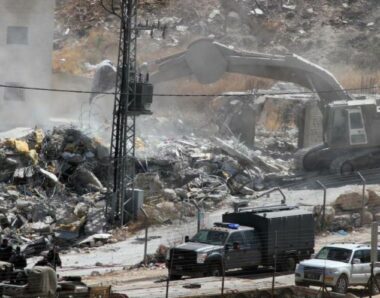 Media sources said the soldiers, and undercover officers, invaded the town, and demolished one home, owned by Mohammad Shawkat Khatib.

They added that the army claims the property was built without a permit from the City Council, in occupied Jerusalem.

In related news, the soldiers invaded Zeev village, south of the southern West Bank city of Hebron, before demolishing a cave and an agricultural shed, and confiscated three mobile homes.

In addition, the soldiers demolished three agricultural structures in the al-Mas’udiyya area in Sebastia town, northwest of the northern West Bank city of Nablus.

On Monday at night, a Palestinian was forced to demolish his own home in Jabal al-Mokabber town, in Jerusalem, after the city council refused to grant him a permit.

While Israel continues to build and expands illegal colonies, and retroactively “legalizes” colonialist outposts in the occupied West Bank, including Jerusalem, it continues to deny construction permits to the Palestinians and refuses to grant permits to existing structures.