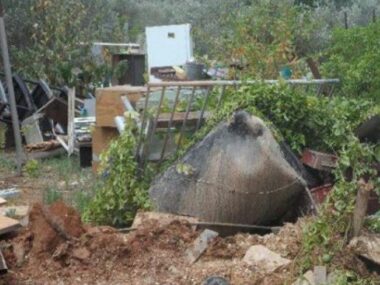 Fuad al-‘Amour, the coordinator of the Protection and Steadfastness Committees, said the soldiers demolished an agricultural shed near the archeological area in Zeev hill, north of Yatta town.

He added that the sheds is owned by members of Shatat local Palestinian family, and stated the demolition is the second in recent months.

The army claims the shed is close to the bypass road, used by the illegal Israeli colonialist settlers.

On His part, the coordinator of the Popular and National Committees against the Annexation Wall and Colonies, said the soldiers also demolished a cave, owned by Aziz Shatat.