Abbas: Palestinians No Longer Accepting US Role in Peace Process 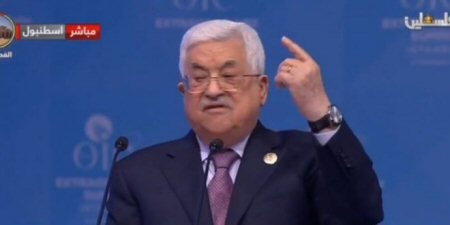 PA president Mahmoud Abbas, on Wednesday, said that the Palestinians will no longer accept any role for the United States in the Middle East peace process, following President Donald Trump’s recognition of Jerusalem as the capital of Israel.

Abbas, speaking at the the Istanbul gathering of heads of state and top officials from the 57-member Organization of Islamic Cooperation, had called Trump’s decision “a war crime” that threatened world peace, calling on the United Nations to take charge of the peace process and create a new mechanism, arguing that Washington is no longer “fit” for the task.

The Palestinians are committed to a peaceful resolution of the Israeli-Palestinian conflict, Abbas said, but after Trump’s seismic shift on Jerusalem, Washington is not accepted as a fair negotiator, the AP reported.

Last week, according to the PNN, Abbas aides said that the Palestinian leader would not meet with Mike Pence during the U.S. vice president’s planned visit to Israel and the West Bank, next week.

Turkish President Recep Tayyip Erdogan— the current president of the OIC — called on countries to urgently recognize the Palestinian state and Jerusalem as its capital.