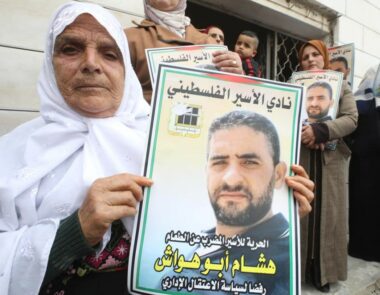 The Palestinian Detainees’ Committee has reported, Saturday, that Hisham Abu Hawwash, 40, held by Israel under the arbitrary Administrative Detention orders without charges or trial, is ongoing with the hunger strike he started 131 days ago, despite his seriously deteriorating health condition.

The Committee stated that, according to the latest information it received, Abu Hawwash is currently at the infamous Ramla prison clinic that lacks doctors and basic supplies, and that his health condition is very serious, especially due to deficiency in minerals and dangerous levels of weight loss, in addition to constant fatigue and dizziness, and is dependent on a wheelchair when he leaves the bed.

The Committee warned that the detainee might face serious complications that could include irreparable damage to the heart, kidneys, lungs, and liver, in addition to the nervous system.

It added that the Israeli courts are still denying his legitimate demands to end his arbitrary detention, especially since he is not facing charges, in addition to the fact that, nearly two weeks ago, an Israeli court decided to keep him held under the Administrative Detention orders for four additional months that could be renewed at any given moment.

The Committee also said that all medical reports indicate that he is in a life-threatening condition, yet the prison authority is refusing to even transfer him to a civilian hospital.

The International Red Cross also expressed serious concern regarding his health, adding that its medical teams repeatedly visit with him, and will continue to closely follow his condition.