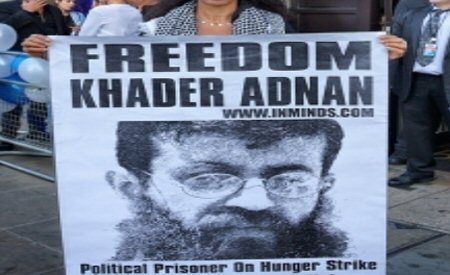 Leader of the Islamic Jihad movement, Khader Adnan, from the town of Arraba, in the Jenin district of the northern occupied West Bank, has continued his open hunger strike for 37 days in a row, in protest of his illegal and arbitrary detention.

According to the Mohjat al-Quds Foundation for Martyrs and Prisoners, Adnan is still on strike, demanding his right to be free.
The detainee’s wife said that her husband is forbidden to visit his lawyer or his family, that they did not know of his poor health conditions due to the strike and medical negligence, and that there is a fear to lose his life.
Israeli occupation forces detained Adnan on December 11, 2017, charging him with incitement,
He achieved a qualitative victory in two previous strikes fought while in detention, and let the occupation acquiesce for his right to freedom, according to Al Ray.
He is now fighting his battle for the third time in a row, demanding his legitimate right to freedom and rejection of arbitrary detention.