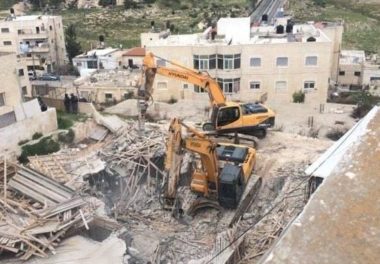 Dozens of Israeli police officers invaded, Sunday, Sur Baher Palestinian town, south of the Al-Aqsa Mosque in occupied East Jerusalem, and demanded the Palestinians to remove a tent, which was installed to protest a Supreme Court ruling to demolish 16 residential buildings of more than 100 flats.

The Israeli decision came after the City Council in the occupied city claimed that the buildings are close to the illegal Annexation Wall, which was installed on Palestinian lands.

Hamada Hamada, the head of the Services Committee of Wad al-Hummus, al-Mintar and Deir al-Amoud neighborhoods, in Sur Baher town, said the neighborhoods are in Areas A, B and C, and the lands are owned by the Palestinians, including the Local Government of the Palestinian Authority.

Hamada added that the targeted Palestinian buildings are 25 apartment buildings of around 250 flats, and said that Israel issued various demolition orders, in addition to orders halting the construction of most buildings in that area alone.

16 of the apartment buildings, which contain altogether more than 100 flats, are under the immediate threat of demolition.

He also stated that, a week ago, the Israeli Supreme Court denied the appeal, which was filed by the residents, and ordered the immediate demolition of the buildings, but without setting a date.

The Palestinians then decided to install a protest tent, and remain there, and the police has since been ordering them to remove it and leave the area.