After Emerging From An Israeli Prison, Freedom Flotilla Captain Accuses Canada’s Government Of Complicity In A “Slow Genocide” 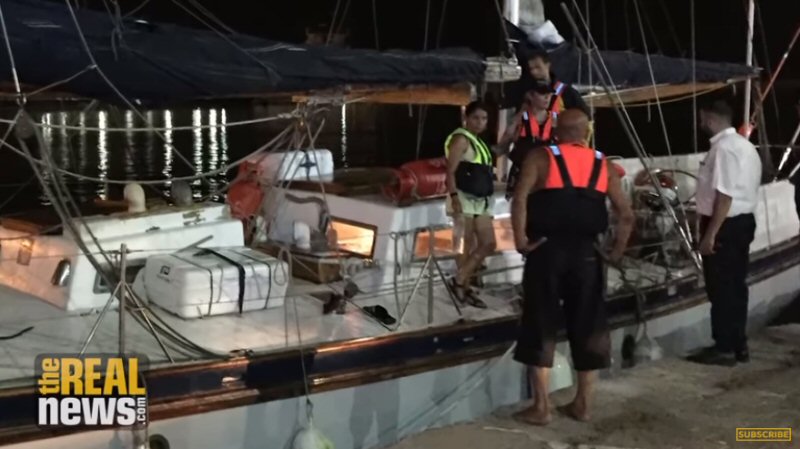 DIMITRI LASCARIS: This is Dmitri Lascaris, reporting for The Real News Network from Montreal, Canada.

For the past few months, The Real News has been covering the voyage of the Freedom Flotilla from Scandinavia to Gaza. Matters came to a head in late July when Al Awda, the lead vessel of the flotilla, was hijacked in international waters by Israel’s navy. Its passengers were then forced to enter Israel and were incarcerated there. The second vessel in the flotilla, the Freedom, was hijacked by Israel’s navy a few days later. Freedom was captained by Canadian human rights activist John Turnbull. The Real News spoke to John by satellite phone a few days before Israel’s seizure of the vessel. And last week, John was finally released from an Israeli prison after the seizure and was permitted to leave the country. He joins us today from Paris, France. Thanks very much for joining us, John.

DIMITRI LASCARIS: John, why don’t we start with the moment at which the vessel the Freedom was first contacted by Israeli forces, and then talk to us, please, about the seizure of the vessel. How did that unfold?

JOHN TURNBULL: Well, we are a sailboat, a fairly heavy, reasonably large sailboat, 72 feet long. We were waiting for nightfall, expecting to be contacted, and in fact hoping that they might let us go until sunrise the next day. But that was not to happen. Around 7:00 we received a VHF call. It was fairly standard call asking for identity. But when the questions got a little farther than our simple identity, which is convention, I objected. That I didn’t understand the nature of the call, or the intent behind it.

At that point, the Israeli navy read two statements- in fact, I think it might have been a recording of a statement- basically saying we were entering a military zone and our vessel could be confiscated. And then a few moments later there was a sort of second degree, but similar, message. We began at that point, and now it’s about 8:00, to notice lights surrounding us on all the cardinal and intermediate points of the compass. Those lights came closer. A little bit like seeing the eyes of wolves in the forest, if that’s happened to you.

And around 9:00, shortly after 9:00 local time- I have to be careful here, because on the ship we were on UTC time, we were approached by two very large, powerful, diesel inflatable landing craft, essentially, that came out from our quarters, from our stern, and pinched the boat between them. At that point a woman aboard one of the boats using a bullhorn announced her name, and told us that we were ladies and gentlemen, and that they were the Israeli navy, and they came in peace. Which I think is a lovely phrase, especially when it’s accompanied by about 20 to 25 soldiers, all armed with machine guns across their backs. No lifejackets, that surprised me a little.

They came aboard the boats. And very quickly, of course, we put our hands up to indicate that we were not going to resist them. It would have been very dangerous on that particular boat. And a fellow came back who seemed to know a little bit about sailboats, and he asked me to steer a particular course. And I said, no, I don’t work for the Israeli navy. And so he began to steer the boat in.

We steered the boat under [inaudible], the boat under sails for several minutes. Had some problems with the boat, obviously it’s a complex boat, and eventually took it under tow. We were towed into Ashdod. And if I can take a moment to describe the image; I think it’ll stick in my mind forever. As we began to approach the coast close enough to see it and to pick out lights, especially at a second level of buildings, we saw a string of lights representing Ashdod, demarcating Ashdod. And then perhaps a mile or three south of Ashdod, the lights, the string of lights stopped and there was nothing but darkness. And we were then looking at this dark shoreline which, under cover of darkness, of course, hid about 2 million prisoners in Gaza. It was quite a moment for me. I knew this intellectually but to feel it in my heart was quite different.

By this time the sun was coming up. It was 6:30, 6:00 in the morning. We were put ashore at a big ugly old dock. We were all taken to shore. We all made the statement that we did not wish to be there. And we were processed through a series of temporary tents by, I’d say-. Well, there were 12 of us. There were probably 120 border control people, people taking pictures. Young folks in uniform. All milling about, all making a tremendous racket. And we were checked. Searched, of course. Checked by a doctor. Asked to sign papers. Refused. Our passports were photographed, etc. And then there were a couple of further body searches. Nothing really invasive. Nothing grim about that. We were finally put into a van, what the French would call a kind of [inaudible], a kind of metal box that you couldn’t see out of, and we were taken off to prison, which I guess is a few miles north of Ashdod.

DIMITRI LASCARIS: What were conditions like in prison, and how long were you held there?

JOHN TURNBULL: We were held five and a half, six days. Conditions were, I suppose, like any prison in a modern, wealthy country. Not nice, pretty noisy. Concrete floors, steel doors banging, prison guards yelling at each other for no reason at all, apparently. A little bit tatty. This is- and I don’t mean to give it a, you know, a travel adviser rating, but it was a little rough. It’s a deportation prison. And this, of course, is the irony of the Israeli deportation laws. We did not want to be there, but the prison is normally there for people who do want to stay in Israel, and they’re being put out. It had a courtyard with an old office chair in it, and it had a kind of quaint, lived-in quality, which was kind of nice.

We slept in steel bunks on thin mattresses, just like prisoners do, and we were given a breakfast of fresh cucumbers. I have to say, they were very good. And that’s about what we had. That and a bit of hummus for the following five days.

DIMITRI LASCARIS: Right. And the documents you were presented, were they in the English language, or in Hebrew?

JOHN TURNBULL: Well, they were in English, at least the first document. And this was a point of some confusion. The first document essentially said that we would waive, that we were being asked whether we wanted to waive our right to stay in the country for 72 hours, because someone- normally someone deported from Israel now has a right to stay in the country for 72 hours to arrange his or her affairs, get paid, et cetera. Of, course we were in the opposite situation. We were not particularly interested in staying there. However, we were interested in making as much fuss as possible for the judges and other officials involved.

So a couple of us eventually signed the paper. It had no effect on our time of leaving. It was confusing, whenever we decided, whenever one of us decided it was time to sign the paper, the paper suddenly disappeared. So it was a whole lot of nonsense that amounted to very little, in legal terms.

DIMITRI LASCARIS: And your-. Was the vessel seized in international waters?

JOHN TURNBULL: We were seized at 37 miles from the port of Gaza, which is international waters. That is just to say it’s outside the 12 mile, 12 nautical mile limit from the shoreline. No question this was international waters. We were on a bearing of roughly 120 degrees. So people who have a chart in front of them can imagine where we were.

DIMITRI LASCARIS: And finally, John, how would you assess- you’re a Canadian citizen. How would you assess the Canadian government’s reaction to all of this? Specifically, in your view, has it done enough to ensure that the rights of the passengers and crew of the flotilla were respected, and that Israel be held accountable for any violations of those rights?

JOHN TURNBULL: Well, the second part of your question first. No, I don’t believe enough has been done. And of course, I’m more concerned about the rights of Palestinians. You know, a guy like me who has a five-year prison experience, that’s a story. That’s, you know, that’s dinner conversation. The story here, of course, is that Palestinians suffer this and much, much worse for their entire lives. And for me, you get in, you get out.

The Canadian government, I have to say, the bureaucracy, I think they did a perfect bureaucratic job. They got in there two days after we were captured. They advised me, they began to set up routes to France or to Toronto. As it turned out, it was France. They did their jobs beautifully. At another level of that embassy and that consul, of course, there’s the complete acceptance and support, enthusiastic support, for what has recently been shown to be, even since I was let out, what has shown to be an attempt have slow genocide of an entire people. And this is an ally of Canada. I would never have imagined in my youth living in a country, Canada, with a reputation for human rights, now forming close relations, close and profitable relations, a country that as a matter of policy is poisoning, for example, a million children in Gaza, or is holding prisoner two million people who cannot get out without the permission of their jailkeepers.

So the fact that I’m out of custody, that’s, that’s not the story. The fact is there are six and a half million Palestinians who remain in the custody of the Israeli government.

DIMITRI LASCARIS: When you refer to the poisoning of the children, I assume you’re talking about the fact that virtually all of the water is contaminated; something the range of 95 percent.

DIMITRI LASCARIS: Well, John, we thank you for your time, and welcome you back to freedom. And really appreciate all the time you’ve taken to keep us abreast during the course of this voyage at The Real News of the development of the entire expedition. Thank you very much, John.

JOHN TURNBULL: Thank you, Dimitri. And thanks to The Real News.

DIMITRI LASCARIS: And this is Dimitri Lascaris, reporting from Montreal, Canada.