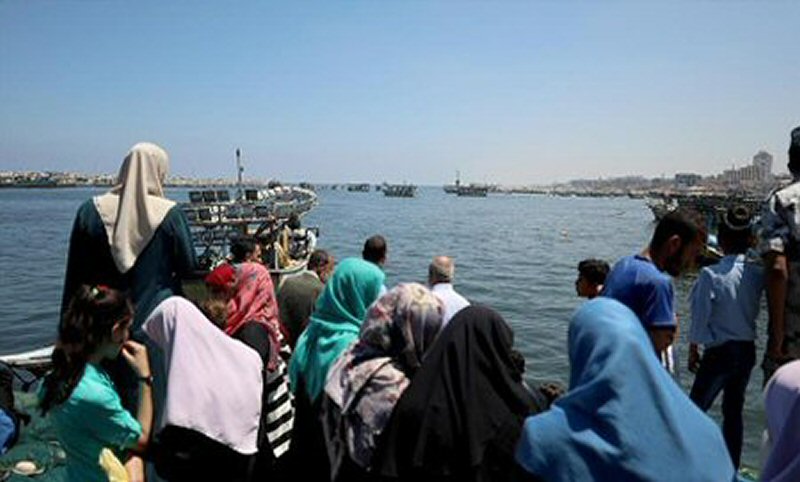 This interview was conducted with a crew member of one of the Freedom Flotilla ships sailing off from Sweden to break the illegal Israeli blockade of the besieged Gaza Strip. The ships are carrying peace activists from around the world, who aim to raise awareness about the Israel-Gaza conflict along the way. This is her story:

Would you please briefly introduce yourself?

My name is Divina Levrini. I am a Swedish human rights activist and I am sailing with “Ship to Gaza” to break the illegal and inhumane Israeli blockade of Gaza.

May you tell us details about the trip?

There are four boats going to Gaza this year. Three boats from Sweden and one from Norway. There are many people with various nationalities, including Israelis and Palestinians, who are part of the flotilla. In mid-May I began my journey on one of the small boats sailing off from Sweden called “Falestine” but later switched to one of the larger boats called “Freedom.” Crew members of the boats change every one to two weeks. I am one of few, who will be part of the entire journey, from beginning to the end. The entire trip takes about 2.5 months. We are aiming to reach Gaza by the end of July if we are not being boarded by Israeli occupation forces. We are being realistic and know that the chance of us reaching Gaza is close to zero because Israel has stated that no boats are coming in.

Why did you decide to travel from Sweden to Gaza?

For me it was an easy choice. I have been reading about Palestine since I was a teenager and it touched me. This conflict is different from many others because it’s a modern day apartheid and a genocide that never should be accepted. I am a mother of two children, who have to live in this world and it’s up to us, adults, to change it for the better. The children of Palestine are no different and should be able to live as freely as my children in Sweden. This trip is a humanitarian and peaceful act to raise awareness, and if it makes politicians act, then we have succeeded in many ways.

What happened when the French police blocked the freedom flotilla boats from docking at the port?

Many people were trying to stop the flotilla boats. The earlier boats were sabotaged on their way to Gaza. The two small boats from Sweden were not able to dock in Paris. The French police chased them away and made them take down all banners about Gaza. In Cascais, Portugal our boat “Freedom” had booked a place in the harbor, but the owner of the harbor temporarily refused to allow the boat to dock after finding out who we were. The dockworkers union in Cascais called the owner telling him that if the boat would not be let it, then about 400 people would be blocking the harbor. Hence, allowing us to dock. These type of situations only give us more press coverage. That is what the Palestinians of Gaza need. They need to be remembered. They need the world talking about them. We are just four boats but we want to restore the right of movement to the people of occupied Palestine.

Were you present on one of the flotilla boats in 2010 when Israeli forces killed 10 activists? If yes, may you describe the scene?

I was not there when it happened in 2010. Israeli forces killed 9 peace activists on one of our boats and later one more peace activist succumbed to his wounds caused by the Israeli occupation forces.

Do you fear that such an incident might happen once again when you get in the vicinity of the Gaza-Israel border?

We are peace activists and go through a non-violence training on our way. We will not try to provoke one of the worlds’ most powerful armies. That is not our goal. We are aware that our boats will be searched but Israel knows about our arrival, and so do our governments.

As a peace activist, what is your purpose by risking your life to raise awareness around the world about the nearly 12-year blockade of Gaza?

I risk a lot by going, but it is an action I must take. I can’t sit by and watch the genocide of Palestinians. The world has been through this before and has succeeded in ending a lot of occupations. The amount of support we have received on our way is overwhelming and shows there is support for Palestine. I believe that without human rights activists nothing will change, but as I said during our trip “maybe you are the change you have been waiting for.”

IMEMC Interview 06/18/18: ‘The camera is our peaceful weapon’: In Conversation with the Youngest Activists in Hebron