After School in Hebron, A Journal – 6 Boys Detained by Israeli Forces in 2 Days

On Tuesday, 24th December, 2 boys were detained at Salaymeh checkpoint after being ambushed by a group of soldiers sneaking around in gardens and through a garage before bursting out behind the boys who were standing in a driveway. The boys were not throwing any the stones but were just randomly grabbed by the soldiers as they ambushed them. ISMers were only meters away and security camera footage confirms that the boys were merely standing in the driveway at the time. Two of the boys were aged 11 and one 10. One can only imagine the terror young boys experience when suddenly kidnapped by soldiers of the occupying army!

The Israeli Zionist forces are renowned for their cruelty even to minors: imprisoning children as young as 10 through their military courts and prisons system in which there are no rights for Palestinians. The youngest ever Palestinian child prisoner was released just days ago after a three-year prison sentence from 12 to 15 years of age.

Imagine what goes through the mind of a 10-year-old child suddenly grabbed by an armed solder from an occupying army and dragged from his neighbourhood! Fortunately, the boys were released after being detained for more than an hour inside the checkpoint.

Today also (December 5), 3 boys were abducted aged 14, 13 and 11. The boys attend two of the local schools and were kidnapped from the street around 300 metres from Qeitun checkpoint. They were standing in the street talking about 3 metres from an ISM activist when they were ambushed by Israeli Border Police.

The two younger boys were released later today, but the 14-year-old was taken away. According to the headmaster of the Hebron School, Khalil Abu Sunaineh, the older boy could face up to 6 months imprisonment. The military court does not need to give evidence to support any accusation on the grounds that it is “classified information”. There is a 98% conviction rate.

The headmaster showed us pictures on the wall of the school hallway, over 70 pictures taken over the last two years show child arrests, tear gas, concussion grenades both inside the school and on the street outside. They are the tip of the iceberg. He has been at the school for 14 years! 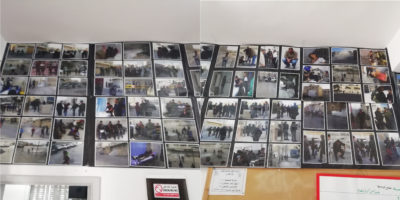 A gallery of soldier invasions of the school, abductions, concussion grenades and tear gas in the school and on the street outside.

He also told us that the soldiers and border police sneak around in the middle of the night mapping the neighbourhood and planning their ambushes. We’d witnessed this ourselves during the day. It was creepy enough in the daytime seeing soldiers just walk around in people’s gardens, exploring every alleyway, entering apartment buildings at will and ascending to the rooftops. It must feel violating to live under these circumstances.

Israeli forces justify their actions because some Palestinian children throw stones at them. To the uninformed this may seem a valid argument on the surface. However, it’s important to remember that the Israelis are the occupiers and have absolutely no rights under international law to defend themselves from the people they occupy. They are the aggressors. They are not civil enforcement officers of the Palestinian community.

This argument also holds no water because usually in any specific situation the Israeli forces are the aggressors who initiate conflict.

Even if we accepted this erroneous argument, the children who were detained on these two days were not throwing stones. To detain, or arrest and imprison them, for what someone else has done at any time at all is unjust and a form of collective punishment.

What justification can there possibly be for concussion grenades, toxic tear gas (228 tear gas rounds were fired in the Salaymeh / Qeitun neighbourhoods in 15 school days between November 4 and November 27, 2018 (including 34 in one day!) along with 51 concussion grenades), intimidation, abduction and invasion of streets and schools by armed soldiers in residential neighbourhoods?

Examples of tear gas being used in the Saleymeh / Quetun neighbourhoods.

These are children! Such actions are totally unacceptable on minors.

Do such actions promote peace? Do they not actually sustain and deepen the inhumane occupation of the Palestinian people?

Do they not also inspire rejection of the immoral occupation, and provoke further resistance against such oppression?

Fortunately, Palestinians usually choose non-violent resistance rather than violence, leaving Israelis with the moral predicament of enforcing the immoral and illegal occupation and the international community with the shame of their inaction.