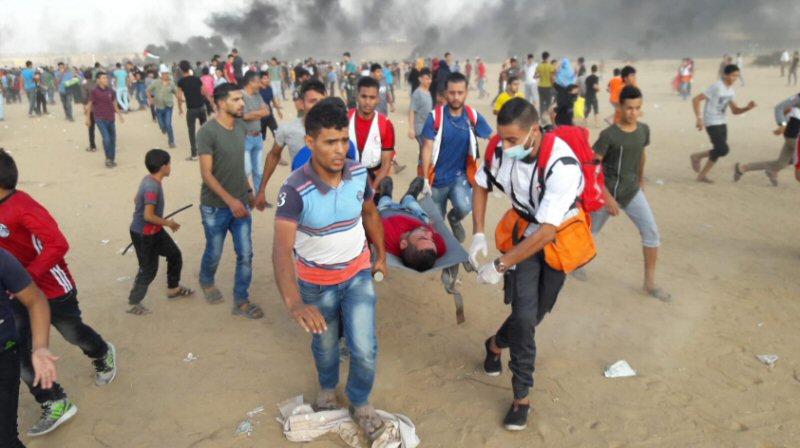 ~Doctors Without Borders/Days of Palestine

The vast majority of the 3,117 patients treated by M√©decins Sans Fronti√®res (MSF) between 30 March and 31 October ‚Äì out of the total 5,866 the Ministry of Health says have been injured by live fire ‚Äì had been shot in the leg. Around half suffered open fractures, with severe soft tissue damage to many of the rest.

These are complex and serious injuries that do not quickly heal. Their severity and the lack of appropriate treatment in Gaza‚Äôs crippled health system means that infection is a high risk, especially for patients with open fractures.

Gaza currently lacks the ability to properly diagnose bone infections, but from experience MSF expects that at least 25 per cent of patients with fractures are infected. Out of roughly 3,000 open fractures, this means it is likely that more than 1,000 patients are infected.

Based on a preliminary analysis of MSF‚Äôs patients in Gaza, we estimate that at least 60 per cent of the total number of injured patients treated by all health providers ‚Äì a massive 3,520 people ‚Äì will need further surgery, physiotherapy and rehabilitation.

A significant proportion of those patients will require some form of reconstructive surgery to properly heal, but untreated infections will prevent that from happening.

This burden is too much to bear for the health system in Gaza in its current form, weakened as it is by more than a decade of blockade.

Such a large number of injuries affects not just the injured; it also puts a strain on the provision of regular healthcare in Gaza.

The consequences of these wounds ‚Äì especially if untreated ‚Äì will be lifelong disability for many, and if infections are not tackled then the results could be amputation or even death.

Although MSF and other organisations are working hard to provide treatment for these patients, the scale of the needs is quickly becoming overwhelming, challenging our continued ability to respond.

The situation is also worsening as more people are shot, wounded flesh and bone dies, and the risk of infection increases.

An adequate response will cost tens of millions of euros ‚Äì money that urgently needs to be found.

‚ÄúMSF has already tripled its capacity in Gaza but the required volume of surgery, carefully managed antibiotics, intensive nursing care, and long-term physiotherapy and rehabilitation is staggering,‚Äù said Marie-Elisabeth Ingres, MSF‚Äôs head of mission in Palestine.

What is required now is:

As Ingres concludes, “the alternative ‚Äì that thousands of patients will be left to deal with terrible injuries, with many permanently disabled and dependent on their families ‚Äì is unconscionable when adequate treatment is within the world‚Äôs grasp.‚Äù

Samidoun: Colonial ‚ÄúDeal of the Century‚Äù sure to fail; time to fight back and defend Palestine

How Israel Exploits the Holocaust to Justify War Crimes Against Palestinians