PCHR: On 36th Friday of the Great March of Return and Breaking Siege, Israeli Forces Wound 58 Civilians, including 14 Children and Paramedic 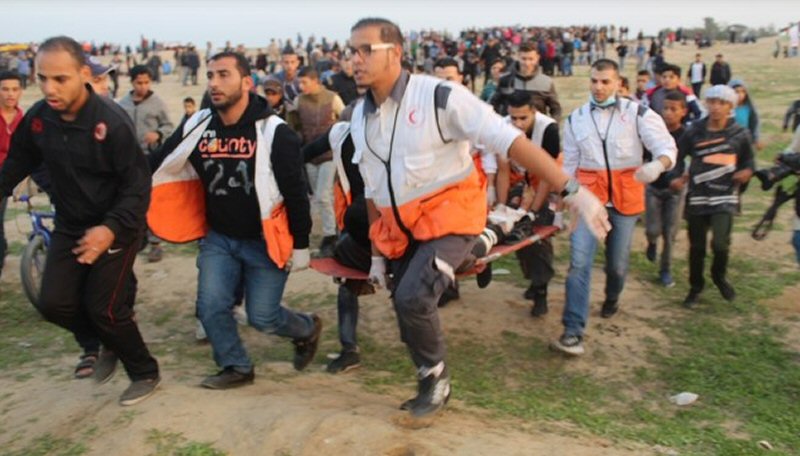 On Friday evening, 30 November 2018, Israeli forces wounded 58 Palestinian civilians, including 14 children and a paramedic in the peaceful demonstrations in the eastern Gaza Strip despite the decreasing intensity of the demonstrations there for the fifth week consecutively and absence of most means usually used during the demonstrations since the beginning of the Return and Breaking the Siege March 7 months ago.

According to observations by PCHR’s fieldworkers, for the fifth week since the beginning of the Return March on 30 March 2018, the demonstrators abstained from setting fire to tires while the attempts to cross the border fence and throw stones and incendiary balloons were completely absent.

Though the demonstrators were around tens of meters away from the border fence, the Israeli forces who stationed in sniper positions and military jeeps along the fence continued to use excessive force against the demonstrators by opening fire and firing teargas canisters at them, without the later posing any imminent threat or danger to the life of soldiers.

At approximately 14:30, thousands of civilians, including women, children and entire families, started swarming to the five encampments established by the Supreme National Authority of Great March of Return and Breaking the Siege adjacent to the border fence with Israel in eastern Gaza Strip cities and raised flags, chanted national songs in addition to organizing sportive and folklore performances inside the encampments and its yards. Hundreds, including children and women, approached the border fence with Israel in front of each encampment and gathered tens of meters away from the main border fence. Further, setting fire to tires, throwing stones, incendiary balloons and Molotov cocktails were almost absent. Despite the prevailing calmness, the Israeli forces fired live and rubber bullets in addition to hundreds of teargas canisters, particualry in eastern Jabalia, Gaza and al-Bureij refugee camp. The Israeli shooting, which continued at around 17:00, resulted in the injury of 58 Palestinian civilians, including 14 child and a paramedic. Doctors classified 4 civilians’ injury as serious. In addition, hundreds suffered tear gas inhalation and seizures due to tear gas canisters that were fired by the Israeli forces from the military jeeps and riffles in the eastern Gaza Strip.