Army Abducts A Child In Hebron 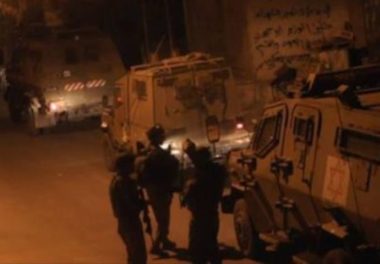 Israeli soldiers abducted, on Sunday at dawn, a Palestinians child in Hebron, in the southern West Bank city of Hebron, and installed many roadblocks near towns around the city, before stopping and searching dozens of cars.

Media sources in Hebron said the soldiers stormed and searched a number of homes, and abducted a child, identified as Ahmad Shaher Gheith, 15, in the southern area of the city.

They added that the soldiers installed roadblocks at Abu al-Halawa junction, in the southern area of Hebron city, in addition to the southern entrance of Bani Neim town, and the northern area of Yatta town, before stopping and searching dozens of cars.

The soldiers interrogated many Palestinians while inspecting their ID cards, causing huge traffic jams in the entire area.