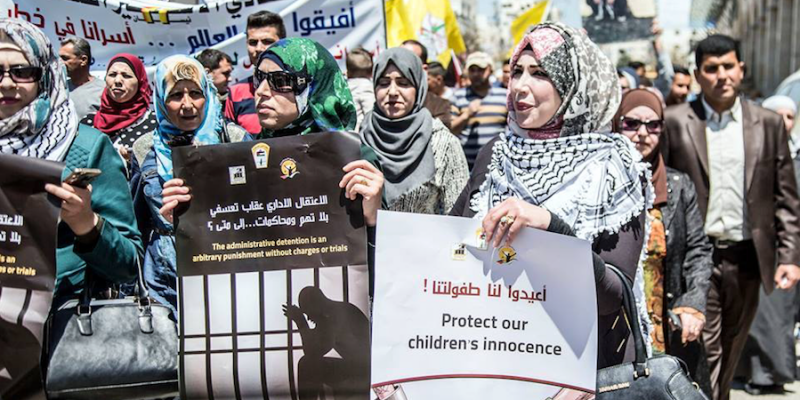 Israeli soldiers shot and killed Moussa Mshour Mashahra, 21, on April 19, 2017 at Gush Etzion junction. They allege Mashahra attempted a car ramming attack. One Israeli settler was injured at the scene.

On April 24, 2017, Israeli forces raided Palestinian homes and farms in the village of Karmel, east of Yatta. The same day, soldiers descended on Deir Samit and Beit Ummar, where they shot live fire and tear gas.

Clashes broke out between Palestinian youth and Israeli forces in the market area of Hebron city on April 27, 2017. Locals at the time were rallying in support of the prisoners on hunger strike. The clashes escalated around noon when Israeli forces entered the Bab al-Zawiah area and shot live ammunition, tear gas and sound grenades. At least two Palestinians were injured and one was arrested. Many others suffered from tear gas inhalation.

In Beit Ummar that same day, Israeli forces attacked a march for the prisoners. Between two and six Palestinians were injured with live fire and rubber coated steel bullets, while five others suffered from excessive tear gas inhalation. Israeli forces also entered ten Palestinian homes and occupied their rooftops.

Stop and frisks and arrests:

In the first three months of 2017, Israeli soldiers arrested approximately 300 Palestinians from the Hebron district, including at least 53 children, according to the Palestinian Prisoners’ Office. Below are snapshots of these ongoing arrests in April.

On April 2, 2017, the Israeli military court held a trial for four human rights activists who were arrested in Hebron during demonstration for Land Day the following month. The men secured theirrelease on April 3 by paying a 3,500 NIS ($1000) fine for participating in an “illegal demonstration.” Badee Dweik, one of the arrested activists, reported that the Israeli prison guards had deprived him of meals, refused to administer his diabetes medication, strip searched him, and punished him for refusing to do “humiliating acts” naked. The trials of the activists are ongoing.

On April 11, 2017, Israeli forces arrested a Palestinian father who was out with his three sons near Ibrahimi Mosque. He is filmed kissing the boys goodbye before being blindfolded and taken into an Israeli military jeep to an unknown location.

Israeli forces detained a Palestinian woman three days later, on April 26, 2017, at the Tel Rumeida checkpoint. The soldiers claim she was carrying a knife.

On April 30, 2017, Israeli forces arrested Hebron resident, activist, and former prisoner and hunger striker Thaer Halahil, 38, at a checkpoint between Hebron and Bethlehem. Halahil, who is from the village of Kharas in the Hebron and previously spent 11 years in Israeli prison. In 2012, while incarcerated via an administrative detention order, he endured a 78-day hunger strike to oppose the Israeli policy of imprisonment without charges or trial.

On April 1, 2017, in the early afternoon in the South Hebron hills near Havat Ma’on settlement outpost, settlers attacked a Palestinian boy with a developmental disability. The boy was walking to a neighboring plot of Palestinian land where his family was waiting for him when settlers hit him in the head with rocks propelled by a slingshot.

The following day, April 2, 2017, settlers claimed that neighboring Palestinians stole beehives from Ma’on settlement. Israeli soldiers subsequently raided the nearby village of at-Tuwani and allowed the settlers to search barns. One settler reportedly threatened the life of a Palestinian activist in sight and earshot of his military escorts.

On April 15, 2017, Israeli settlers and soldiers confronted Palestinians and international volunteers planting olive trees on Palestinian land in the South Hebron Hills. The settlers urged the soldiers to remove the activists, and the military forces obliged.

Hassan Shaloudi, 14, was transferred to a hospital in Hebron, after being beaten to the point of fainting by Israeli settlers on April 21, 2017. The settlers reportedly stopped Shaloudi on his way to school and ordered him to open his bag and dump its contents on the ground. When he refused to do so, the settlers attacked him.

Restrictions on Palestinian development and movement:

Israeli forces expanded a road-closure near Shuhada checkpoint in Hebron city on April 2, 2017. The row of blocks prevents Palestinians from dropping people off in front of the checkpoint.

The same day, Israeli forces delivered demolition orders in the village of Um al Khair, southeast of Yatta in the Hebron district.

On April 6, 2017, Israeli forces notified Palestinian residents in Tel Rumeida of plans to begin construction of a new military checkpoint in the area.

On April 10, 2017, Israeli soldiers removed a stone memorial site for 16-year-old Bian Asila, a Palestinian martyr who was killed in Hebron two years ago. The Times of Israel reports the removal of the memorial plaque is a part of a Israeli military “campaign” against “incitement.” Israeli soldiers shot and killed Asila near the Ibrahimi Mosque in 2015 after he allegedly stabbed an Israeli soldier in the arm.

Israeli soldiers raided the home of a Palestinian family living on Shalallah Street in the Old City of Hebron each night of the week leading up to the Jewish holiday of Passover, which began on April 10, 2017. On these nights, about six soldiers forced their way into the home and then onto the roof where they would sit for one hour. The father of the family believes the army is punishing him for welcoming tour groups to his home; his rooftop overlooks Beit Haddassah settlement and a military outpost.

The following day, on April 13, 2017, Israeli soldiers raided the Friendship Garden in the Old City of Hebron, disrupting a Palestinian festival.

Israeli forces invaded Shuhada Street Kindergarten and then occupied the neighboring rooftop of the Sharabati family’s home and removed a Palestinian flag from it on April 20, 2017.

On April 24, 2017, Israeli authorities delivered demolition orders for two Palestinian-owned homes and a well in the South Hebron Hills. The structures are located in Area C and “Firing Zone 918.”

Throughout April, Israeli settlers hung Israeli flags on deserted Palestinian homes in the Israeli occupied area of Hebron city, an area where most Palestinians are forbidden from walking on foot and all Palestinians are barred from driving cars.

West of Hebron city on April 1, 2017, dozens of Israeli settlers descended on Khirbet al-Muwarraq, a Roman Empire-era palace overseen by the Palestinian Ministry of Tourism and Antiquities. The settlers reportedly prayed at the site. The ministry denounced their presence as “an obvious breach of international law and agreements.”

The next day, April 5, 2017, Israeli settlers hosted an event at the Ibrahimi Mosque to “thank the Israeli Defense Force.” Dozens of soldiers in uniform attended the event.

The Israeli military took control of “the hall of Rebecca and Isaac” in the Ibrahimi Mosque to allow Israeli settlers access to it on April 12 and 13, 2017. The settlers also held a festival for Passover in the area.

On April 12, 2017, dozens of Israeli settlers entered Dura village and set up tents for Passover.

Outside of the Ibrahimi Mosque on April 30, 2017, settlers and Israeli military officials held the second event of the month to thank Israeli soldiers for occupying Hebron.

A  sign hung by Israeli settlers that names a street in Hebron in Hebrew and English only. Photo credit: Rabbis for Human Rights.

On April 3, 2017, Youth Against Settlements and Rabbis for Human Rights requested cooperation from Israeli officials to remove signs hung by Israeli settlers in Hebron. Some signs, which are plastered on Palestinian private property, feature biblical passages to ostensibly justify Israel’s illegal occupation of Hebron. The two groups add that Israeli settlers have also removed signs indicating Arabic street names and replaced them with Hebrew and English street signs. Two weeks later, Israeli authorities rejected the request to remove the signs citing “the almost certain likelihood of violence and even life-threatening friction.”

Hundreds Palestinians in Hebron demonstrated to mark Prisoners Day on April 17, 2017. Slogans were raised in support of the 1,500 Palestinian prisoners who launched a collective hunger strike for basic rights that day.

On April 21, 2017, Palestinians held Friday prayer in honor of the hunger striking Palestinian prisoners in Hebron city. A protest for the prisoners commenced after prayers.

Students at al-Quds Open University in Hebron staged a performance about the suffering of the political prisoners on the April 22, 2017.

The following day, April 23, 2017, local activists set up a second solidarity tent in Hebron’s city center for the hunger-striking prisoners.

On April 26, 2017, a march for the prisoners on hunger strike began at the solidarity tent in Ibn Rushed Square and proceeded to the Shuhada Street checkpoint. Six Palestinian activists from the Dismantle the Ghetto campaign also initiated a two-day hunger strike in solidarity with the prisoners.

Palestinians in Hebron continued to gather, mobilize, and educate the public on the issue of Palestinian prisoners at Hebron’s solidarity tents on April 27, 2017. Shops were also closed for a general strike in solidarity with the prisoners.

On April 28, 2017, Palestinians held Friday prayers in solidarity with the Palestinian prisoners on hunger strike.