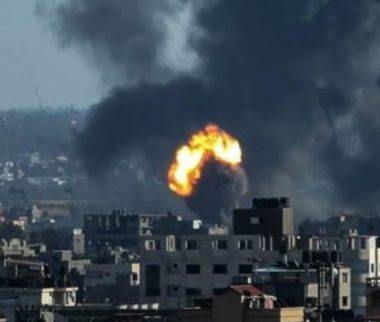 Israel’s army said early Friday it had launched fresh strikes against Islamic Jihad targets in Gaza, despite a ceasefire in place since Thursday morning.

In a WhatsApp message to reporters, Israeli military claimed it was “striking Islamic Jihad terror targets in the Gaza strip,” The New Arab (Al-Araby) reported.

Israel typically does not publicly acknowledge deals with militant groups, and on Thursday officials said the only unwritten agreement was that Israel would hold fire so long as Islamic Jihad did.

Israel’s military spokesmen listed a series of ‘accomplishments’ after the two-day spasm of violence, including the killing of some 25 ‘militants’ in targeted strikes.

The ceasefire had been agreed upon between Israel and Palestinian factions, after two days of fighting in Gaza saw thirty-four Palestinians killed in exchanges of fire.

Israeli Foreign Minister Israel Katz said the policy had “proved itself” and would continue.

“Everyone who was a top military official, who was set to carry out, and was involved in terror or rocket firing against Israel was eliminated,” he told Israeli Army Radio. “And we intend to continue with this.”