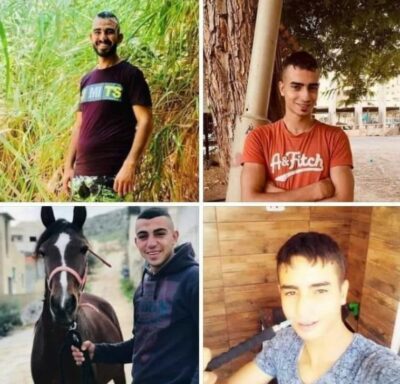 Aug 17, 2021 – (Al-Haq) In the early hours of the morning on 16 August 2021, a special undercover force of the Israeli Forces raided the northern West Bank city of Jenin and its refugee camp. During the raid, four Palestinian civilians were killed, Saleh Amar, 19, and Raed Abu Saif, 21, from the Jenin city and Nour El-Din Abdel Ilah Jarrar, 19, and Amjad Iyad Husseinieh, 20, from Jenin refugee camp. According to the Palestinian Ministry of Health, they were shot with live ammunition in the upper chest. The army also retained and is still holding the bodies of Nour El-Din Abdel Ilah Jarrar and Amjad Iyad Husseinieh. Additionally, the army detained Mohammad Abu Zaina after raiding his home in the Jenin refugee camp. Since January 2021, soldiers have killed 10 Palestinians in Jenin, including six who have been killed since the beginning of August alone.

Israel’s indiscriminate, excessive, and unlawful use of force against Palestinian civilians persists in the Occupied Palestinian Territory (oPt), as a result of the prolonged and prevailing climate of impunity shielding Israeli soldiers from prosecution. While the army have been operating under a shoot-to-kill policy, in 2020, a draft Israeli law proposed to prevent holding to account Israeli soldiers who have killed Palestinians during their military service.

As the Occupying Power, Israel must abide by its obligations under international humanitarian law and international human rights law. As such, Israel must respect the right to life of the population in the OPT, using no more force than what is absolutely necessary. Al-Haq condemns the use of live ammunition against Palestinian civilians, which may amount to unnecessary, disproportionate and excessive use of force. Additionally, the killing of Palestinian civilians by soldiers, may amount to wilful killings, and therefore grave breaches of the Geneva Conventions and war crimes within the jurisdiction ratione materiae of the International Criminal Court (ICC).

Israel’s arbitrary home raids, especially in the densely populated Jenin refugee camp systematically violates Palestinian civilians’ basic human rights, such as the right to liberty and security of person, and the rights to privacy, family and home.

Al-Haq is gravely concerned with Israel’s practice of withholding the bodies of deceased Palestinians to circumvent the prompt and immediate collection of evidence from autopsies. Customary international law provides that parties to an armed conflict must respect the dead who “must be disposed of in a respectful manner.” In addition, Article 17 of the Second Geneva Convention requires that the deceased must be held in accordance with the religious rites that they belong to. While the families have a right to be informed of the fate of their deceased relatives.

Al-Haq calls upon the international community to ensure that Israel respects its obligations under international law in the OPT, including the substantive and procedural requirements of the right to life, the right to security of person, and the right to privacy and home. Most importantly, Al-Haq calls on the Office of the Prosecutor of the International Criminal Court to expedite its investigation into the Situation in the State of Palestine and ensure the investigation of Israeli wilful killings as grave breaches and inhumane acts of apartheid.