Doctors Without Borders: Settler attacks against Palestinians in Hebron on the rise 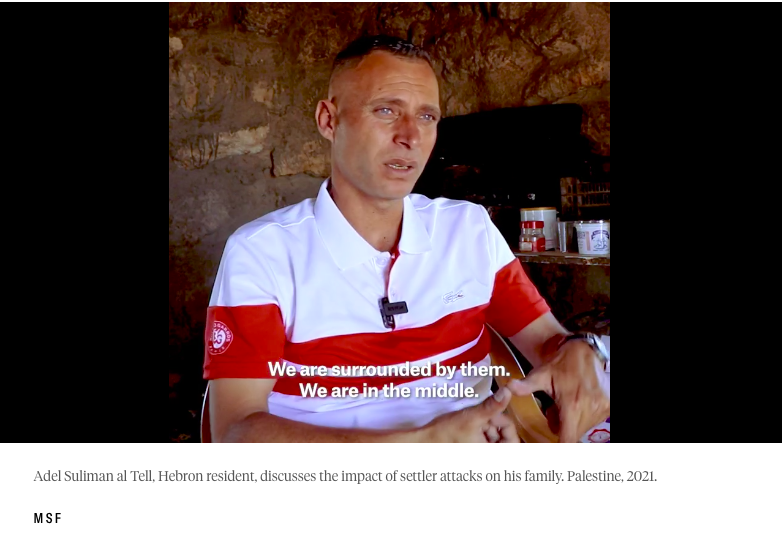 Tuesday, August 17, 2021 (Doctors Without Borders) – Nearly three months after an escalation in violence in the Gaza Strip left 256 Palestinians and 13 Israelis dead, the situation across Palestine remains volatile. The Gaza conflict took place against a backdrop of rising insecurity in the West Bank, with attacks by Israeli settlers on Palestinians up in comparison to the same period in 2020, according to Doctors Without Borders or Médecins Sans Frontières (MSF).

In the first six months of 2021, according to the UN, there had already been 273 attacks by settlers against Palestinians or their property, compared to 370 incidents in the whole of 2020, and 340 incidents throughout 2019.

Long a hotspot for violence in the Occupied Palestinian Territories, the Hebron district has seen an uptick in settler violence since the start of the year. Approximately 600 Israeli settlers reside in the city of Hebron alongside a Palestinian population of more than 35,000. The settlers are protected by more than 2,000 Israeli soldiers, according to Israeli human rights organisation B’Tselem.

In 2021, Palestinians in the Hebron district continued to face violence from settlers both inside the city of Hebron and across the district, as well as dealing with the daily realities of life under occupation that include restrictions on movement, limited access to medical services, home demolitions, and the continuous presence of the Israeli military.

We have been present for over 20 years in Hebron, providing mental health treatment and support to those suffering from the impact of living under occupation. In only the first six months of 2021 we had already treated a total of 75 patients with mental health issues following settler attacks – including physical beatings and harassment – compared to 65 patients for the whole of 2020.

Such violence has a significant and long-term psychological impact on the Palestinian population. Symptoms that our teams treat include persistent fear, problems sleeping and eating, anxiety, stress, anger, bed-wetting among children, difficulty concentrating, or an inability to perform daily tasks.

Zanuta, a Palestinian village in Adh Dhahriya about 20km southwest of Hebron district, typifies the Palestinian experience across the West Bank. Its inhabitants depend on livestock and agriculture to survive, but this has grown harder as a result of systematic Israeli policies of land confiscation, insufficient infrastructure including roads, healthcare and education, and most recently the arrival of Israeli settlers on the land.

According to the Tell family in Zanuta, Israeli authorities confiscated nearly 4,000 acres of Palestinian land being used as grazing pasture for livestock and gave approval for four new settlements in the area.

“Now we are surrounded by four settlements. We are in the middle. This has happened in the past two months,” says Adel Tell, a resident of Zanuta village in Hebron. “We are not allowed to enter our own land, even on foot. We ask the [Israeli] police and the civil administration but they support the settlers.

“We have legal documents proving our ownership of the lands, but despite this they do not allow us to reach our pastures and they attack the shepherds with dogs and weapons. They are terrifying all the residents here,” says Adel.

Mariam Khdeirat is Adel’s mother. “I have problems with my legs,” she says. “When the settlers chase my children all I can do is scream, because I cannot move and cannot reach them. When the children take the sheep for grazing, I stay here [on the doorstep],” she says. “I keep watching until they come back. When I see a car, I believe it’s the settlers coming to attack them. I stay here on my doorstep until they return.”

“We have been living under a lot of pressure for the last two months,” says Adel. “We live in a state of constant fear. Everyone feels stressed for himself, for his brothers, for his children and friends.

“You are stressed all the time, even when you’re at home, because you keep thinking of these new settlers who have come and who are attacking the shepherds and the livestock. All of us are thinking about this because it is new to us and we have never been under this kind of pressure,” he says. “We are all afraid.”

Our teams are responding to settler-related and other forms of violence in Hebron by providing psychological support to those who need it. In Zanuta village, we provide mental health support through individual counselling, group activities and counselling for women on self-care, stress management, anger management, awareness sessions on COVID-19, awareness raising of the violence around them, and teaching coping mechanisms. We have also run group counselling activities for children on stress management, relaxation, awareness sessions on COVID-19 and awareness-raising about the violence.

“Residents of Zanuta face many challenges in their daily life as a result of the settlers, on top of daily hardships such as movement restrictions and home demolitions that are a result of the Israeli occupation,” says Salah Daraghmeh, MSF project coordinator. “We are providing mental health support to the residents, but we cannot solve the problem of settler violence against the Palestinian people. Only the Israeli authorities can do that.”