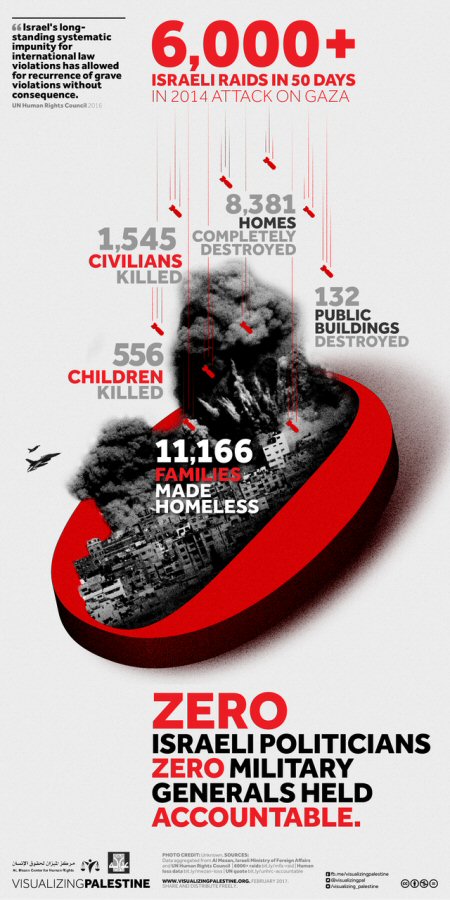 In July 2014, Israel began a military assault on the Gaza Strip, including an indiscriminate bombing campaign and a brutal ground invasion. In total, the assault killed 1,545 Palestinian civilians, including 556 children, and made 11,166 families homeless.

Three years on, no justice has been attained for victims and survivors of the attack. While 500 Palestinian complaints were filed with Israeli military courts over the 2014 Gaza war, only three soldiers were convicted as of August 2016, for minor felonies such as credit card theft. Military commanders and politicians — those most responsible for the massive loss of life — were never held accountable for their role in violations of International Law and International Human Rights Law.

The sole legal recourse for Palestinians in Gaza is the Israeli military court system, a kangaroo court run by the same military which carried out the attack. As the Israeli human rights organization B’tselem explains, “the military is more likely to lose track of a file altogether than to press charges based on a file.”[1]

Visualizing Palestine, Al Mezan Center for Human Rights, and Adalah The Legal Center for Arab Minority Rights have produced a series of visuals to mark the third anniversary of the 2014 attack on Gaza. All the data is sourced from research conducted by Al Mezan on the ground in Gaza during and in the aftermath of the attack, and re-verified in the year following the attack.

Over the next 50 days, Visualizing Palestine will intermittently release a series of visuals highlighting the crime and impunity of Operation Protective Edge.