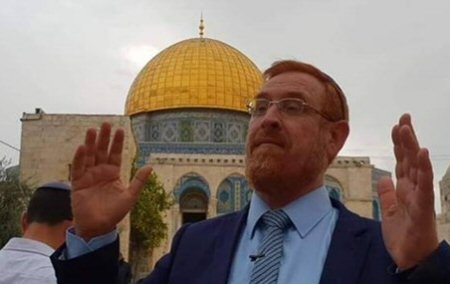 Ultra-Orthodox American-born rabbi and Knesset member Yehuda Glick, along with dozens of Israeli settlers entered the Al-Aqsa Mosque compound in occupied East Jerusalem, on Monday, for the Jewish holiday of Hanukkah.

Firas al-Dibs, head of the Public Relations and Media Department at the Islamic Endowment, said that heavily armed Israeli forces escorted Glick along with dozens of Israeli settlers through the Moroccans Gate into the compound.

According to Ma’an News Agency, Al-Dibs mentioned that Glick and the Israeli settlers performed prayers while under the armed protection of Israeli forces and police, who were deployed across the compound.

Al-Aqsa Mosque compound, which sits just above the Western Wall plaza, houses both the Dome of the Rock and the Al-Aqsa Mosque.
The third holiest site in Islam, it is also venerated as Judaism’s most holy place, as it sits where Jews believe the First and Second Temples once stood. The Second Temple was destroyed by the Romans in 70 AD.

During Jewish holidays, ultra-religious Israelis typically visit the holy site under heavy security, causing tensions to rise between Israeli forces and local Palestinians, who are subjected to unwarranted searches and are arbitrarily prevented from entering the compound.