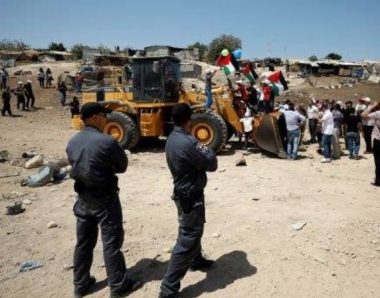 Lawyers of the “Colonization and Wall Resistance Commission” managed, Thursday, to obtain a ruling from the Israeli High Court freezing the demolition of al-Khan al-Ahmar Bedouin Palestinian community until August 15th.

Commission head, Waleed Assaf, said the ruling is related to the one which was achieved last Monday, postponing the demolition until Monday, July 16th, and added that the Israeli Court would be looking into the case in its next session on August 15th.

“We managed to achieve this ruling because of the justice of our struggle on our lands. Solidarity activities managed to highlight the plight of our people in al-Khan al-Ahmar; this is part of the ongoing struggle for protecting the eastern area of occupied Jerusalem. We are struggling to prevent the displacement of our people, to reject the illegal E1 Israeli colonialist project.”

On Thursday, June 5th, the Israeli High Court ruled to temporarily halt the demolition of the Palestinian Bedouin village, following an international media campaign and pressure from foreign diplomats, as well as non-violent passive resistance by Palestinian residents of Khan al-Ahmar, and peace activists.

The entire village is set to be razed to the ground by military forces under the ‘E1 Jerusalem Plan’ meant to encircle the eastern part of Jerusalem with Israeli colonial settlements to encircle Jerusalem and claim it for Israel, denying the Palestinian people’s historical and ongoing claim to the city.