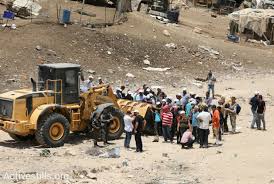 Following an international media campaign and pressure from foreign diplomats, as well as non-violent passive resistance by Palestinian residents of Khan al-Ahmar, the Israeli High Court ruled Thursday to temporarily halt the demolition of a Palestinian Bedouin village located between Jerusalem and Jericho.

The Bedouin village of Khan al-Ahmar is home to dozens of Palestinian Bedouin shepherds and their families. It is the most well-established of the Bedouin villages in the area east of Jerusalem, with a school that provides education to 120 students.

The entire village is set to be razed to the ground by Israeli military forces under the ‘E1 Jerusalem Plan’ meant to encircle the eastern part of Jerusalem with Israeli colonial settlements in order to encircle Jerusalem and claim it for Israel, denying the Palestinian people’s historical and ongoing claim to the city. The plan, which began in 2005 and has vastly expanded Israeli colonial settlements on Palestinian lands, is set to displace hundreds of thousands of Palestinian residents from their homes and add them to the Palestinian refugee population – the largest refugee population in the world.

The decision to temporarily halt the demolition for six days follows an appeal to the Israeli government by the United Nations and by the European Union. The Israeli High Court ordered the state of Israel to respond by July 11th to a petition by residents of the village that the Israeli government discriminated against them in denying their permit for building their homes on their ancestral land.

The villagers of Khan al-Ahmar hold deeds to their ancestral land where they reside, but the Israeli government refuses to recognize the deeds because they were issued by the Palestinian Authority, and the land where the Bedouins live is part of a planned expansion of Israeli settlements.