Arabic Druze Protesters Call for Return of Golan to Syria 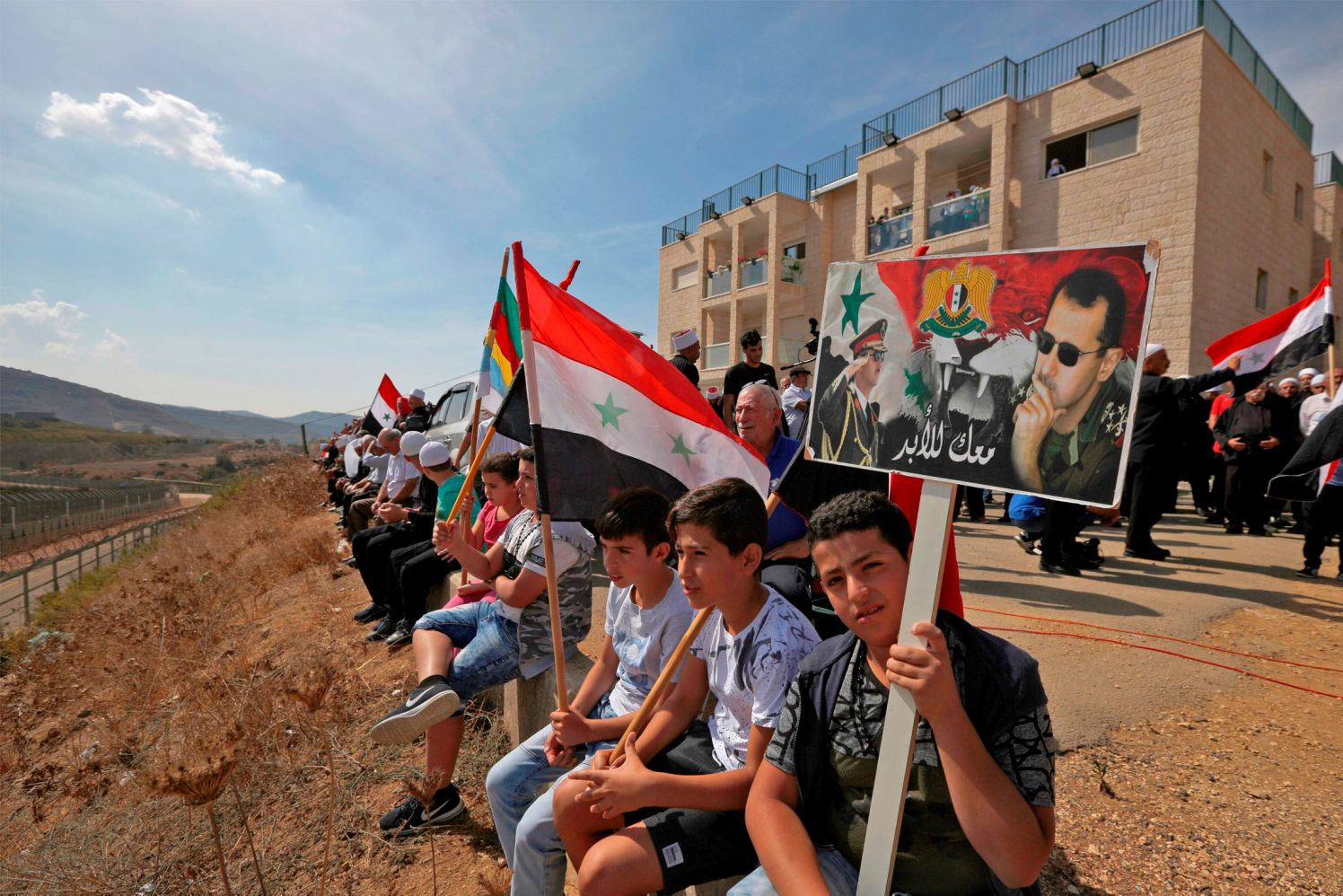 On Saturday, in Majdal Shams in the Israeli-occupied Golan Heights, along the Israel-Syria border in the northern part of Israel, protesters gathered holding Syrian flags and demanding the return of the Golan to Syria.

Across the border, in Syria, people gathered shouting back their support. This is a common occurrence on the Golan-Syria border, where families who have been separated for decades due to the Israeli occupation gather each week to shout their news and family updates across the Israeli-controlled divide.

The protest on Saturday included many elders from the community, who spoke of the period before the Israeli military invaded and began occupying the region in 1967. Many of the participants dressed in the traditional clothing of the Druze religion – black jackets and white hats.

They carried Syrian flags, as well as hanging flags from the nearby buildings. A number of the protesters also carried pictures of Syrian President Bashar al-Assad.

The Israeli newspaper Ha’aretz reported that Emil Masoud, 38, from the village of Massade, told their reporter that the gathering was intended to “celebrate the final stages of the war … and to celebrate with our people in Syria the final stage of victory.”

The Druze people are not considered citizens of any country. Despite serving in the Israeli military and declaring their loyalty to the Israeli government, they have had no passports since 1967. Instead, they have ‘travel documents’ which list their nationality as ‘undefined’.

The town of Majdal Shams is believed to have been founded in 1595 by the Druze people. According to historical documents from the British Ambassador in the 1890s, in times of strife, residents of the surrounding villages travelled to Majdal Shams for safety because of the village’s elevation and proximity to a major water source at Birkat Ram.

According to an August 2018 report in Al Jazeera, “Following the creation of the state of Israel in 1948, the Zionist leadership sought to divide the surviving Palestinian community through notions of particularism – in other words, highlighting religious and traditional differences among them. The Zionists turned their attention to the Arabic speaking Druze community (the Druze religion developed out of Ismaili Islam with adherents concentrated in Lebanon, Syria and Palestine)…over time, the majority of the community were coopted and coerced into the Zionist regime, helping to maintain the façade of the Israeli cultural mosaic. Yet ironically, they would continue to be dispossessed of their lands and denied the same level of infrastructure and services as their Jewish counterparts.”

The BBC reported in 2017, “Syria tried to retake the Golan Heights during the 1973 Middle East war. Despite inflicting heavy losses on Israeli forces, the surprise assault was thwarted. Both countries signed an armistice in 1974 and a UN observer force has been in place on the ceasefire line since 1974. Israel unilaterally annexed the Golan Heights in 1981. The move was not recognised internationally. There are more than 30 Jewish settlements on the heights, with an estimated 20,000 settlers. There are some 20,000 Syrians in the area, most of them members of the Druze sect.”