Archbishop Hanna: “Jerusalem Is Not For Sale” 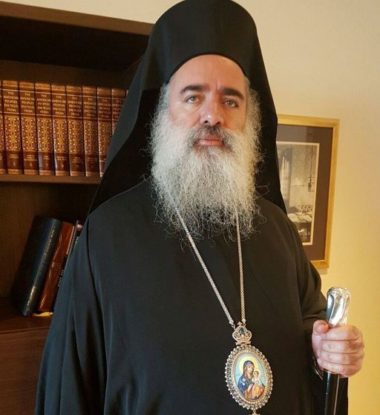 Archbishop of Sebastia from the Greek Orthodox Patriarchate of Jerusalem, Father Atallah Hanna, stated on Tuesday morning, that the so-called “Deal of the Century” of U.S. President D. Trump, is a conspiracy and an attempt to eliminate all inalienable rights of the Palestinian people, and added that “Jerusalem is not for sale; the conspiracy will fail like all previous attempts to eliminate the basic Palestinian rights.”

His statements came while welcoming a delegation in Beit Jala Palestinian city, near Bethlehem, south of occupied Jerusalem.

The archbishop stated that the Palestinian cause has faced numerous conspiracies and attempts to override the fundamental rights of liberty, independence, and sovereignty, but its people invariably stood steadfast, and will always defend their rights.

“Jerusalem is not for sale, is not in an auction; it is and will always be for its native and indigenous Palestinian people,” he stated, “Donald Trump, or any leader in the world, cannot void the Palestinian people, and their just cause”.

“This so-called deal is going to the dustbin of history; the Palestinians will always remain steadfast, defending their existence in the holy land,” Father Hanna added, “The word surrender does not exist in our dictionary.”

“This is our homeland; we are not foreigners, settlers or guests; Palestine is our homeland; Jerusalem is our city, our history,” he added, “The Palestinian Christians, although very few in numbers, are among the cores of the Palestinian society. We reject the Deal of the century because it aims at assassinating and eliminating our fundamental, legitimate rights.”