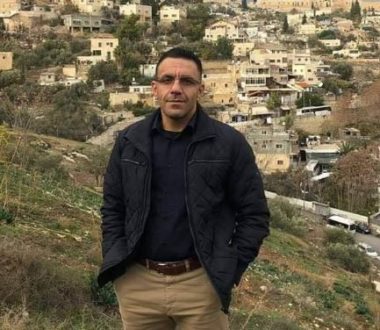 The Israeli army and security apparatus issued orders, on Monday evening, barring the Palestinian governor of occupied East Jerusalem, Adnan Gheith, from entering the West Bank, and another order preventing him from communicating with the Palestinian Authority.

Media sources said the army summoned the governor for interrogation in the al-Maskobiyya detention center and handed him the two orders.

They added that the order’s effective date is February 13th and is valid for six months.

The orders were issued by the so-called General Commander of the Central District of the illegal Israeli occupation. The governor only has 72 hours to file an appeal against the two preconditions.

Following his release from interrogation, the Gheith said that the Palestinian people and their just cause are subject to one of the most aggressive Israeli assaults.

“Our people have been facing oppression and constant violations by this illegal Israeli occupation of Palestine, and now the Israeli leadership is approving more decisions and ruling that violate International Law,” Gheith stated, “But we will continue our legitimate struggle for sovereignty, liberation, and independence.”

It is worth mentioning that Gheith, along with the Secretary of Fateh Movement, Shadi Mitwer, are repeatedly abducted, interrogated and imprisoned by the Israeli army as part of Israel’s constant attempt for prevent the Palestinians from having political activities in occupied Jerusalem.