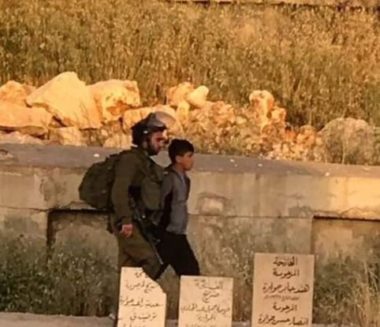 Israeli soldiers abducted, on Tuesday at dawn, eight Palestinians, including children, from their homes in several parts of the occupied West Bank, including Jerusalem, the Palestinian Prisoners‚Äô Society (PPS) has reported.

The PPS office in Hebron, in southern West Bank, said the soldiers invaded and ransacked many homes in the al-‚ÄėArroub refugee camp, north of the city, and abducted Ma‚Äômoun Rashad, Malek Ra‚Äôed Sweilem and a child, Jaber Wa‚Äôel Badawi, 13.

In addition, the soldiers abducted Mohammad Eyad Taha from his home in the al-Jalazoun refugee camp, north of the central West Bank city of Ramallah.

In Nablus, in northern West Bank, the soldiers also searched homes and abducted Islam Amer from his home in Kafr Qalil village, south of the city.

In occupied Jerusalem, the soldiers abducted Mohammad Totanji, from the al-‚ÄėIsawiya town, in addition to Ehab Abu Sneina, 17, from Bab Hotta in the Old city.