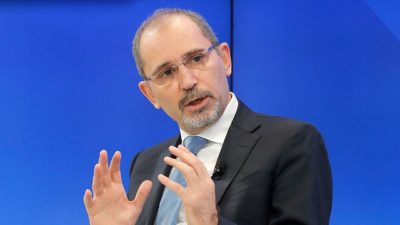 The Jordanian Minister of Foreign Affairs, Ayman Safadi, reiterated, on Sunday the country’s firm support of Jordan for the legitimate rights of the Palestinian people, including the right to an independent state of their own, WAFA reported.

Safadi’s remarks came during a meeting with the Secretary-General of the Palestine Liberation Organization (PLO) Saeb Erekat, in Amman, on Saturday, following US President Donald Trump’s unilateral proposal for Israel-Palestine.

Safadi stated that any solution to the protracted conflict should be on the basis of the two-state solution and the Arab Peace Initiative, and that the only viable peace agreement must lead to the establishment of an independent Palestinian state on the pre-1967 borders with East Jerusalem as its capital.

On Friday, hundreds of Jordanians rallied in the capital of Amman, near the US Embassy, showing their disapproval of the US administration’s so-called peace plan, Anadolu reported.

“Today we say that we condemn Trump’s position and consider him a criminal … [He] violated the global peace and security and [he] violated all agreements. [Trump] must be referred to the international criminal court (ICC), and Arab people everywhere must act.”
– Saleh al-Armouti, Member of the Reform Bloc, Jordan

The unilateral proposal does not meet even the most basic Palestinian demands for comprehensive peace with Israel, including the right of return for Palestinian refugees who were forced out of their homes in 1948.