Archbishop Hanna: “We Salut Our People In Jerusalem, Defending Their Dignity, Holy Sites” 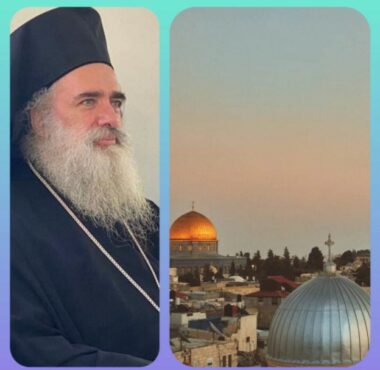 The Archbishop of Sebastia from the Greek Orthodox Patriarchate of Jerusalem, Theodosios Attallah Hanna, saluted the Palestinian people in occupied Jerusalem for remaining steadfast in defending their city, holy sites, liberty and dignity.

“The Palestinians, Muslims, and Christians, in occupied Jerusalem have proven to the world that they will continue to defend their city, to love and protect it, and their legitimate rights in the city,” he said, “The heroes of Jerusalem, in Al-Aqsa Mosque and the Church of the Holy Sepulcher and every corner of the city, are defending their roots in Jerusalem, their history, and will never be subdued to accept occupation and injustice, and will continue to practice their religious and social rights in their homeland.”

“Our Muslim brothers and sisters are celebrating the al-Fitr feast, and we recently celebrated Easter despite the escalating Israeli attacks, violations, and restrictions,” Hanna said, “Jerusalem is the city of faiths, the city of peace, and we need to work on restoring justice and liberty in the holy city, which unfortunately is still occupied and facing constant injustice, it continues to be deprived of real peace based on justice.”