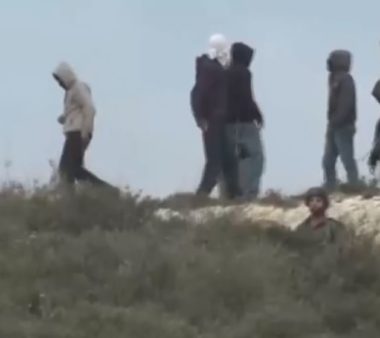 Update: The two Palestinians were taken to Halamesh illegal colony, which was built on Palestinian lands, and are under interrogation by Israeli soldiers there.

Israeli settlers on Tuesday, attacked a Palestinian man in the village of Kobar, northwest of Ramallah, and kidnapped his two sons, according to Kobar mayor, Izzat Badwan.

Badwan told Palestinian WAFA News Agency that around 10 armed settlers from the illegal settlement of Halamish, built on Palestinian lands near Kobar.

The mayor added that after the illegal colonists attacked Samir Zeebar, they kidnapped his two sons, Abdul Fattah and Mahmoud, while they were plowing their farmland, and brought them inside the settlement.

Important to note that despite the coronavirus pandemic and the high incidence seen in Israel, settlers and soldiers continue to harass and terrorize Palestinian farmers and other civilians in the West Bank.

In related news, Israeli soldiers, near the southern West Bank city of Hebron, on Tuesday, fired tear-gas and concussion grenades towards Palestinian farmers who were being attacked by illegal colonists.