Army Injures Two Palestinians, Abducts Two, In Nablus, And One in Jenin 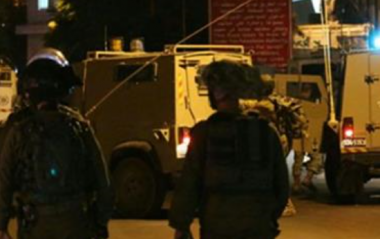 Media sources in Nablus said the soldiers invaded many neighborhoods, and clashed with local youngsters, especially in the Eastern Market area, before shooting Ahmad Abu Mosallam, 20, with a live round in the shoulder, and Fadi Ibrahim ash-Shami, with a rubber-coated steel bullet.

Medics provided the urgently needed treatment to the two Palestinians, before moving them to Rafidia governmental hospital.

The soldiers also invaded and ransacked many homes in the governorate, and abducted Rajaey al-Qonna, from al-Ein refugee camp, and Qoteiba ‘Aseeda, from Tal village.

In Jenin, also in northern West Bank, the soldiers abducted Mohammad Yousef Manasra, 21, from his home, after invading and searching it.

In Ramallah, in central West Bank, the soldiers abducted three Palestinians in Kobar village, and a senior nonviolent activist in Bil’in village.

In Bethlehem, the soldiers abducted six Palestinians, including five teenagers, and summoned one, after invading their homes and ransacking them, in different parts of the governorate.