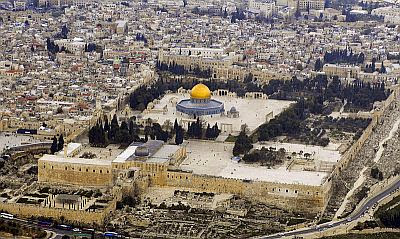 Following a week of clashes around the al-Aqsa Mosque in Jerusalem, the Israeli Security Council voted Tuesday morning to remove the controversial, newly-installed metal detectors, and put in their place a series of ‘smart cameras’ to film everyone entering the mosque and track them using facial recognition software.

Palestinian officials plan to meet with Israeli representatives later in the day about the security measures being put in place by the Israeli government. But Palestinian protesters in Jerusalem have been out in the street already to challenge the cameras, which they say are part of a plan by the Israeli government to take over control of the Mosque.

The Israeli cabinet decided in its meeting Monday to move ahead with a $28 million dollar plan over the next six months to increase security and control at the entrances to the al-Aqsa Mosque.

The Mosque is considered the third-holiest site in Islam, and pilgrims travel from around the world to pray there.

Over the past week, all men under 50 were prevented from entering, and anyone wanting to pray was forced to go through a metal detector. Thousands of people prayed in the streets to protest the security measures.

The United Nations Security Council also met Monday to discuss the crisis at the al-Aqsa Mosque site. Following the meeting, the UN Middle East envoy, Nikolay Mladenov, said: “It is extremely important that a solution to the current crisis be found by Friday this week. I think the dangers on the ground will escalate if we go through another cycle of Friday prayer without a resolution to this current crisis.”