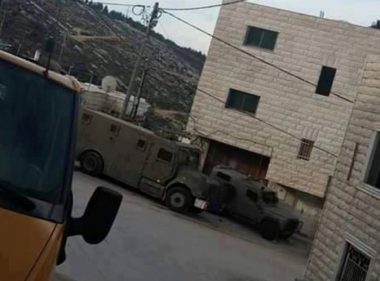 Israeli soldiers invaded, on Sunday at dawn, Teqoua’ town, east of the West Bank city of Bethlehem, searched homes, and abducted two young Palestinian men, in addition to summing another for interrogation.

The Bethlehem office of the Palestinian Prisoners’ Society (PPS) said the solders abducted Ekrema Odah al-Amour, 20, and Mahmoud Yousef al-‘Amour, 21, and took them to an unknown destination.

The invasion led to clashes between the soldiers, and many local youngsters, who hurled stones and empty bottles on the military vehicles, while the army fired gas bombs, concussion grenades and rubber-coated metal bullets.

In related news, the soldiers invaded the al-Baida area, in Beit Sahour, east of Bethlehem, and violently searched the home of Bashir Mas’ad.

On Saturday evening, Israeli soldiers and police officers abducted a Palestinian father, his seven sons, and the wife of one of his sons, in the Sammoa’ town, south of the southern West Bank city of Hebron, and confiscated military uniforms and ammunition.