Israeli Soldiers Abduct Father, His Seven Sons And Daughter-In-Law In Near Hebron 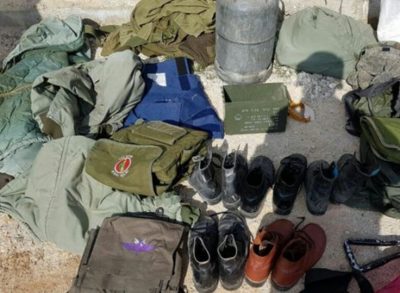 Israeli soldiers and police officers abducted, on Saturday evening, a Palestinian father, his seven sons, and the wife of one of his sons, in the Sammoa’ town, south of the southern West Bank city of Hebron, and confiscated military uniforms and ammunition.

Israeli Police spokeswoman Luba Samri issued a statement claiming that the police, and the army, received info about weapons and munitions in the town, and acted accordingly.

She added that the police detained seven Palestinians, and managed to locate two pistols, a large amount of ammunition, in addition military gear and a uniform.

The abducted Palestinians have been identified as Mohammad Mousa Bheiss, his sons, Mousa, Emad, Rami, Jihad, Ra’fat, Ali and Ra’ed, in addition to the wife of one of his sons. The nine Palestinians were cuffed and blindfolded before being moved to an interrogation facility.