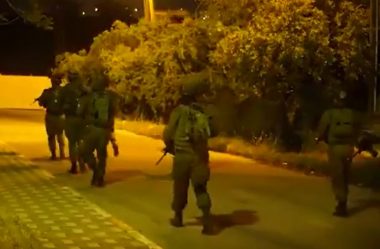 Israeli soldiers abducted, on Tuesday evening, a young Palestinian man, from his home in Beit Awwa town, west of Hebron, in the southern part of the occupied West Bank.

The soldiers invaded the town, and broke into the home of Bakr Rajeh Masalma, 30, before violently searching the property, and abducted him.

The soldiers also invaded many neighborhoods in the town, in addition to Bani Neim nearby town, and Hebron city, and installed roadblocks at Hebron’s northern entrances in Jouret Bahlas area and Halhoul Bridge, before stopping and searching dozens of cars, and interrogated many Palestinians while inspecting their ID cards.

Also on Tuesday, dozens of soldiers invaded the village of al-Mogheer, east of the central West Bank city of Ramallah, searched many homes before abducting one Palestinian. The soldiers also shot and injured one Palestinian and handed demolition orders targeting a number of homes.