Army Injures A Palestinian, Abducts Another, Near Ramallah 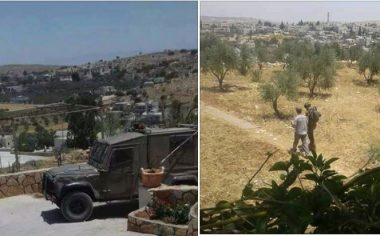 Dozens of Israeli soldiers invaded, on Tuesday afternoon, the village of al-Mogheer, east of the central West Bank city of Ramallah, searched many homes before abducting one Palestinian. The soldiers also shot and injured one Palestinian and handed demolition orders targeting a number of homes.

The soldiers invaded the village before storming and searching several homes, and handed a demolition orders targeting a few homes, an issue that led to clashes.

The soldiers fired many rubber-coated steel bullets, wounding a young man, and abducted another Palestinian before moving him to an unknown destination.

The army also declared the village a closed military zone from six in the evening, Tuesday, until one after midnight.

It is worth mentioning that the village has been subject to daily violations, invasions and searches of homes.