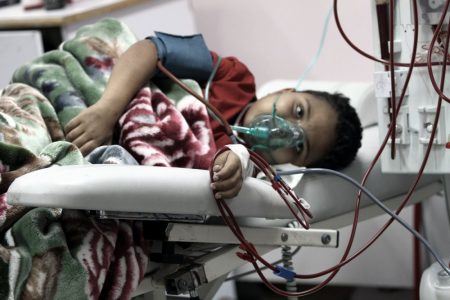 As the humanitarian situation in the besieged Gaza Strip continues to raise alarms, reports emerged on Monday that the occupied West Bank-based Palestinian Authority (PA) has been preventing Palestinians in the coastal enclave from leaving the territory for medical treatment.

Palestinians in Gaza have provided testimonies to Israeli daily Haaretz, reporting “unexplained delays” in receiving permits from the PA for medical treatment in Israel, Jordan, and the West Bank.

The reports came at the same time as patients in Gaza have been forced to apply for permits to exit the territory for treatment owing to the lack of medicine and equipment after the PA cut its funding to the medical sector in the besieged enclave, according to Ma’an.

Data provided to Haaretz from Physicians for Human Rights-Israel (PHRI) has added to claims that the PA has halted its assistance to sick patients in Gaza. According to the data, the PA has delayed and dramatically reduced its issuance of payment vouchers to more than 1,600 Palestinians in Gaza in need of medical treatment, some of whom must exit the territory to receive the treatment.

More than 90 percent of patients in Gaza who have requested such vouchers over the past month have not received a reply from the PA, while only 10 of the some 120 daily requests submitted to the PA have been getting approved.

However, the Palestinian Health Ministry denied the allegations, according to Haaretz.

Recent PA policies have exacerbated the situation in Gaza, and coupled with Israel’s decade-long siege have created a humanitarian crisis in the territory, and some of the most affected are the sick.

Haaretz reported that a recent PHRI delegation to the Gaza Strip found that a shortage of Fentanyl, an anesthetic drug, was threatening to shut down every operating room in the public hospitals in Gaza, and that the cause for the shortage was due to the PA’s refusal to transfer the drug from the West Bank.

Reports emerged, in May, that vital medicines were not being sent by the PA to Gaza.

General-Director of Gaza’s Health Ministry, Munir al-Bursch, had said, last month, that medicine had not been sent by the PA for three months, and added that 17 types of cancer medicines had completely run out in Gaza, as of May.

Al-Bursh added, at the time, that more than 90 percent of cancer medicines were not available in Gaza, which he said risked forcing the ministry to depend on transferring cancer patients to hospitals abroad or obtaining medicine outside of the Palestinian territory, all of which requires difficult-to-obtain Israeli permits.

Haaretz had reported, in April, that PA authorities had planned to slash Gaza’s health budget as “punishment” for the Hamas government “turning down Palestinian President Mahmoud Abbas’ initiatives to restore PA control in the Strip.”

Officials close to Abbas had reportedly told Haaretz that the PA would “only pay for salaries of medical personnel, not for the ongoing management of the health care system.”

The PA’s funding of Gaza’s education system is also expected to be affected.

“We realize this sounds cruel, but, in the end, after 10 years of the split and Hamas rule in the Strip, (Hamas) must decide whether it will control things in every sense, including ongoing expenses, or let the Palestinian government rule,” a senior adviser to Abbas reportedly told Haaretz.

The PA Ministry of Health denied the reports.

Nevertheless, PHRI said, earlier this month, that Gaza was facing the worst medication crisis in years due to the PA budget cuts, with the main victims of the crisis being cystic fibrosis patients, cancer patients, and infants with developmental deficits.

Information gathered by PHRI from Gaza’s Health Ministry showed that the regular monthly budget had been $4 million, which dropped to $2.3 million in April, and to a mere $500,000 in May — affecting the regular operations of 13 government hospitals and 54 primary care centers.

According to PHRI, one-third of essential medicines and more than 270 medical equipment items for operating rooms and intensive care units can no longer be obtained in the the health ministry’s storerooms or in Gaza’s hospitals.

The PA has come under heated criticism in recent weeks, by fellow Palestinians, the international community, and even right-wing Israeli Defense Minister Avigdor Lieberman, for intentionally pushing Gaza into a humanitarian crisis.

Such policies escalated, this month, when the PA decided to slash funding for Israeli fuel to the coastal enclave, and requested that Israeli authorities dramatically reduce its supply of electricity to Gaza, which was already reeling from lack of adequate access to electricity and fuel.

The PA caused anger in Gaza, in April, after cutting salaries to its Gaza-based employees by at least 30 percent, while the PA has also decided to discontinue payments to some 277 former political prisoners of Israel, which some have said targets former prisoners in Gaza and those affiliated with Hamas in the West Bank.

Despite the PA denying the allegations, it is widely believed among Palestinians and international critics that the PA’s recent policies in Gaza are aimed at putting pressure on Hamas to relinquish control of the besieged coastal enclave and hand over the territory to the PA.

Others have pointed out that the PA’s policies are also intended to pressure Hamas to reverse its new alliance with discharged Fateh leader Muhammad Dahlan, which a leaked report has indicated could become the leader in the besieged territory.

“The humanitarian crisis in Gaza must be a wake-up call for everyone able to solve the problem,” PHRI Executive Director Ran Goldstein said, earlier this month.

“Gaza’s children have become hostages in the political game played by the Palestinian Authority, Hamas, and Israel. The change must be dramatic and immediate — providing funds, medicines, and electric power, opening Gaza to the outside world and offering urgent humanitarian assistance,” Goldstein added.