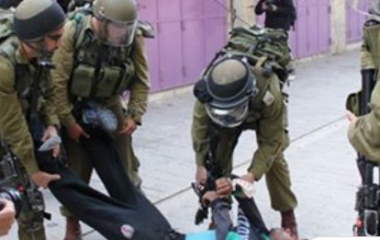 Israeli soldiers abducted, Thursday, a Palestinian from his home, in Doura town, south of Hebron, in the southern part of the occupied West Bank.

Media sources said the soldiers invaded and searched the family home of a young man, identified as Mo’tasem Samir az-Zeer, and abducted him.

The soldiers cuffed and blindfolded the young man, and placed him in their jeep before moving him to an unknown destination.

In addition, the soldiers invaded many areas in Hebron city, especially Abu Sneina neighborhood and Wad al-Harya, in addition to the al-Fawwar refugee camp, south of Hebron.