B’Tselem: “Contrary to military statement: ‘Abd a-Rahman a-Shteiwi, 9, was shot in the head with live ammunition” 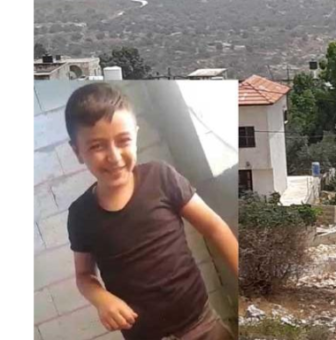 This Report is prepared and published by the Israeli Information Center for Human Rights In The Occupied Territories (B’Tselem): B’Tselem investigation published today proves a soldier fired live ammunition, hitting ‘Abd a-Rahman a-Shteiwi, 9, in the head.

A-Shteiwi was injured last week while playing in the entrance to a home in Kafr Qadum during the weekly demonstration in the village. Now hospitalized in critical condition, he is the latest victim of the reckless open-fire policy that allows soldiers to use live fire even when neither they nor anyone else is in any danger.

At about 1:30 PM on Friday, 12 July 2019, the regular weekly demonstration against the closure of the main access road from Kafr Qadum to the regional capital Nablus took place. The military blocked the road in the early 2000s, following the expansion of the adjacent settlement of Kadum. Since then, residents have been forced to use a bypass road that lengthens the journey by about half an hour.

During the demonstration, a few dozen youths threw stones at a number of soldiers deployed along the ridge on the outskirts of the village, several dozen meters from the demonstrators. The soldiers fired rubber coated metal bullets at the protestors, but, in a departure from previous practice in Kadum protests, this time, they also fired a large number of live rounds in the air.

At a distance of about 200 meters from the main protest, about ten protestors threw stones at four soldiers who were a few dozen meters away from them, on another hill on the same ridge. About 100 meters away from this group, further down the road, a resident of Kafr Qadum was sitting under an olive tree with his two 10-year-old children. Opposite them, about 10 meters away, ‘Abd a-Rahman a-Shteiwi, 9, was sitting at the entrance of one of the homes on the edge of the village playing with a piece of wood.

At about 2:20 PM, as the main demonstration, some 200 meters away from ‘Abd a-Rahman a-Shteiwi, began to disperse, a soldier fired a live bullet. It hit boy’s head and he immediately fell to the ground. The resident who was sitting nearby and a young man who was in the area evacuated the boy to an ambulance waiting some 50 meters away down the road. ‘Abd a-Rahman was taken unconscious to Rafidia Hospital in Nablus and underwent head surgery. Two days later, on 14 July 2019, sedated and ventilated, he was transferred to the intensive care unit at Sheba Hospital in Tel Hashomer.

In its statements to the media, the military denied that soldiers used live fire, and even rejected any responsibility for the incident. A response the military released claimed that the soldiers had used “various crowd-control methods” and that “a report was received of an injured boy aged around ten.” However, 9-year-old A-Shteiwi’s injury is a direct result of the open-fire policy implemented by the military in the Occupied Territories. This policy illegally and without any justification permits the use of live fire against Palestinians who are not endangering anyone. The policy remains in force despite the fact that it has resulted in hundreds of Palestinian deaths and thousands of injuries.

The military prides itself on regulations restricting the circumstances in which live fire may be used, while at the same time claiming that the law enforcement system will take action against soldiers who violate the regulations. However, these statements are hollow and meaningless. In many cases, the open-fire regulations are completely disregarded. Meanwhile, the law enforcement system is actually a whitewashing system intended to create the illusion of investigations. A-Shteiwi is the latest victim of this policy, but unless it is changed, it is only a matter of time before the next victim is added to the list.