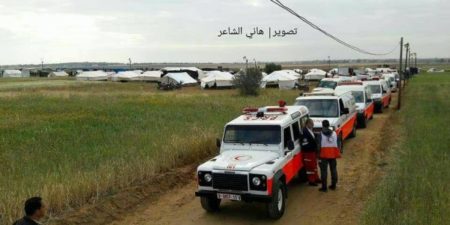 The Palestinian Ministry of Health in the Gaza Strip said tha  it was facing an “unprecedented” shortage of essential medicines and medical supplies, on Tuesday.

“The medical crisis in hospitals and health centers is the most difficult during the years of the Israeli siege on the Gaza Strip,” a statement from the ministry read.

The statement noted that the shortage deprived 50 per cent of patients in the Gaza Strip from treatment.

It called on all parties to take urgent and effective measures to provide essential medicines for patients with cancer, blood diseases, kidney failure, neurological and psychological illnesses, as well as chronic diseases.

The Gaza Strip has suffered more than 12 years under siege by Israel, with support from Egypt and the international community. Goods, food, aid, construction materials and other essentials have not been allowed in, and people have been left unable to leave even to access medical care.

The General Federation of Palestinian Labour Unions reported, last year, that, as a result of the siege, unemployment in the enclave almost doubled to 50 per cent, rising from 27.2 per cent before 2007.

Due to the ban on the entry of fuel, Gaza’s sole electricity plant has been forced to shut down leaving civilians with only 4 hours of electricity a day; further exacerbating the humanitarian crisis.

A report released by the UN last month raised concerns that Gaza would be “unliveable” by 2020.