Area A Residential Buildings to be Demolished near Jerusalem 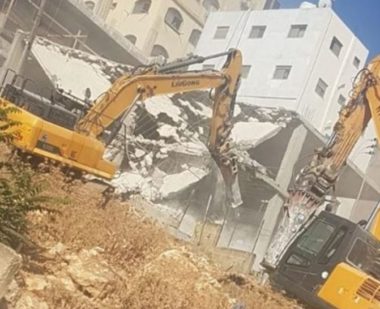 Israeli forces, today, took measurements of 16 Palestinian residential buildings slated for demolition in Wadi al-Hummus neighborhood, located on the edge of Sur Baher, southeast of the occupied city of Jerusalem.

Head of the Wadi al-Hummus Committee Hamada Hamada told WAFA that Israeli forces, along with staff from the so-called Israeli municipality. took measurements of the 16 buildings, which comprise of 100 apartments, in preparation to demolish them as was confirmed one of the owners, Mohammed Abu Tair.

This step, Hamada explained, came after the period given by Israeli authorities to the owners, to demolish their apartments on their own, came to an end today, thus the demolition will be carried out at any moment.

The owners are expected to pay exorbitant demolition fees, as Israeli authorities will carry out the demolition.

The Israeli high court has recently approved the demolition of the buildings, thus upholding military allegations that the buildings are “close to the Annexation Wall” and “pose a security threat” due to their proximity to the illegal wall.

Palestinian appeals to demolition orders are frequently dismissed by Israeli courts, which are in fact complicit in perpetuating the Israeli policies of forcible transfer and ethnic cleansing of Palestinians.

The buildings are located in Area A, supposedly under the full jurisdiction of the Palestinian Authority as per the Oslo Accords.

The demolition is expected to have a disastrous effect on all other areas of the West Bank adjacent to Israel’s wall, putting these areas at a high risk of mass demolitions, under security pretenses, and putting the lives of Palestinians living in such areas at the risk of imminent forcible transfer.