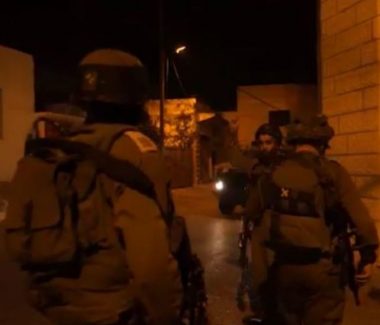 Israeli soldiers invaded, on Thursday at dawn, Beit Dajan village, east of Nablus, in the northern part of the occupied West Bank, and abducted a university student from his home.

Media sources in Nablus said the soldiers broke into and searched a few homes in Nablus, and abducted Naseer Radwan Abu Thabet, who is a student at the Najah University, in the city.

Also at dawn, the soldiers abducted five Palestinians, including a child, in the West Bank governorates of Qalqilia and Tubas.

In related news, several illegal Israeli colonists attacked many Palestinian cars in the northern West Bank governorate of Jenin, causing damage, in addition to assaulting a man after pelting his car with rocks, leading to injuries that required hospitalization.