Israeli Colonists Injure A Palestinian, Cause Damage To Cars, Near Jenin 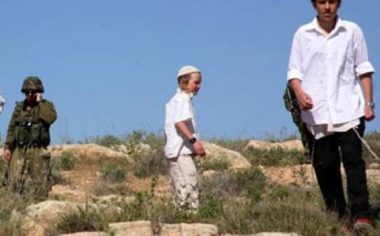 Several illegal Israeli colonists attacked, on Thursday at dawn, many Palestinian cars in the northern West Bank governorate of Jenin, causing damage, in addition to assaulting a man after pelting his car with rocks, causing injuries that required hospitalization.

Medical sources in Jenin said the colonists attacked Ali Ahmad Kabaha, after throwing stones at his car, forcing him to stop, and instantly started beating and kicking him.

A Red Crescent Palestinian ambulance rushed the scene of the attack, and moved the wounded man to Thabet Hospital, in Tulkarem. Kabaha was driving back home when the attack took place.

Furthermore, several colonists invaded the old site of Kadim evacuated outpost, near the Eastern Neighborhood of Jenin, before throwing stones and empty bottles at the Palestinians, in front of the soldiers who did not intervene.

In related news, Israeli soldiers abducted five Palestinians, including a child, in the West Bank governorates of Qalqilia and Tubas.