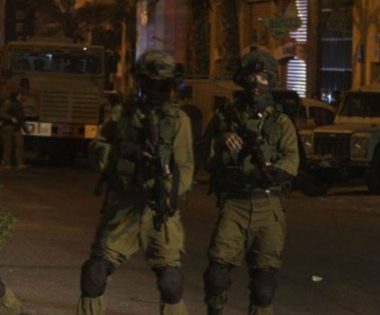 Media sources said dozens of soldiers invaded Jenin city, before storming an apartment building in the al-Basateen neighborhood and detonated the doors of several flats before breaking into them.

The soldiers searched the flats of Shadi Jarrar, Mohannad Masharqa, along with his brothers Essam and Abu Adnan, before interrogating them and their families.

Furthermore, the soldiers abducted one Palestinian, identified as Salem Ghaleb Abu Bakr, from his home in Jenin city.

It is worth mentioning that Mohannad has two other brothers who were abducted by the army more than a year ago and are still imprisoned.

Another Palestinian, identified as Mohammad Awwad, was abducted from his home in Deir Abu Da’if village, east of Jenin.

In related news, dozens of soldiers, accompanying several colonialist settlers’ buses, invaded the northern West Bank city of Nablus, to visit a site known as Joseph’s Tomb in the city.

Media sources said the soldiers clashed with many local youngsters and fired gas bombs and concussion grenades at them.

They added that the soldiers also invaded a residential building in Balata al-Balad village, east of Nablus, searched many homes and flats, and abducted Masoud al-Asmar Dweikat.