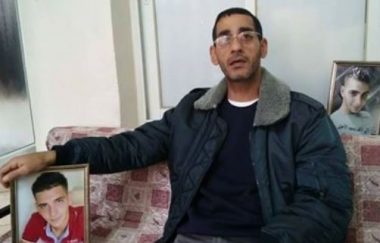 Israeli soldiers abducted, Tuesday, the father of Tha’er Abu Ghazala, who was killed by the army in early October of 2016.

The Abu Ghazala family said dozens of soldiers surrounded their home before invading it, and violently searched the property.

It added that the soldiers then abducted Abdul-Salam Abu Ghazala, and took him to the al-Qashla detention and interrogation center in Jerusalem’s Old City. It is worth mentioning that Tha’er Abu Ghazala was killed in Tel Aviv, on October 8, 2015, allegedly after stabbing and wounding four Israelis.

The Israeli authorities kept his remains in a morgue for ten months, and only allowed a few members of his family to bury him on Tuesday at dawn, August 30, 2016.